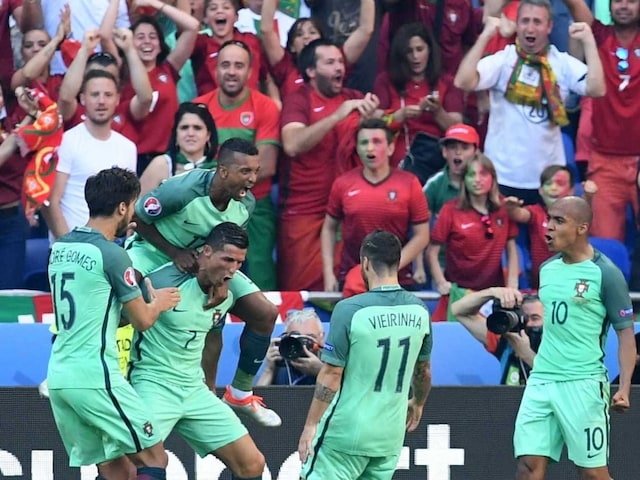 Cristiano Ronaldo scored a magnificent brace as he broke his goalless streak at the Euro championships to help Portugal draw 3-3 with Hungary to qualify for the round of 16.© AFP

Cristiano Ronaldo erupted from his scoring slump by netting his first two goals of the European Championship on Wednesday, helping Portugal earn a 3-3 draw with Hungary and sending both teams into the round of 16.

Ronaldo scored in the 50th and 62nd minutes, the first with a spectacular back heel, making him the first player to score in four consecutive European Championships.

Portugal ended up with three points in Group F from three draws, advancing as one of the top four third-place teams. Hungary won the group with five points, followed by Iceland in second with the same number of points. Iceland beat Austria 2-1 to eliminate the Austrians.

After not scoring in his team's opening two draws, the 31-year-old Ronaldo broke out at Stade de Lyon to increase his record haul with his 59th and 60th career goals.

Ronaldo wiped away a week of frustrations in France that led to him losing his composure just hours before the match when he responded to a TV reporter's question by grabbing his microphone and tossing it into a nearby lake.

Ronaldo's first contribution came after he had again failed to convert a series of free kicks. Instead, he turned playmaker to set up Nani for an equalizer just before halftime, 23 minutes after Zoltan Gera had given Hungary 1-0 lead.

Balazs Dzsudzsak's first of two goals, a deflected free kick, put Hungary back in front in the 47th minute. But moments later it was Ronaldo's turn to get his first goal of Euro 2016.

Dzsudzsak struck again five minutes later with a shot that grazed Nani before looping over Patricio to restore the lead at 3-2. Ronaldo then came through with a second goal to level the score for good when he powered in a header from a cross by substitute Ricardo Quaresma.

Comments
Topics mentioned in this article
Portugal Hungary Cristiano Ronaldo Nani Football
Get the latest Cricket news, check out the India cricket schedule, Cricket live score . Like us on Facebook or follow us on Twitter for more sports updates. You can also download the NDTV Cricket app for Android or iOS.