Tottenham forward Erik Lamela failed to clear in the 74th minute and the ball ricocheted around the penalty area before falling to Alex Oxlade-Chamberlain, who lashed the ball in from close range for an Arsenal equaliser. Lamela put his face in his hands after the goal in the north London derby, whose result leaves Spurs winless in four matches. 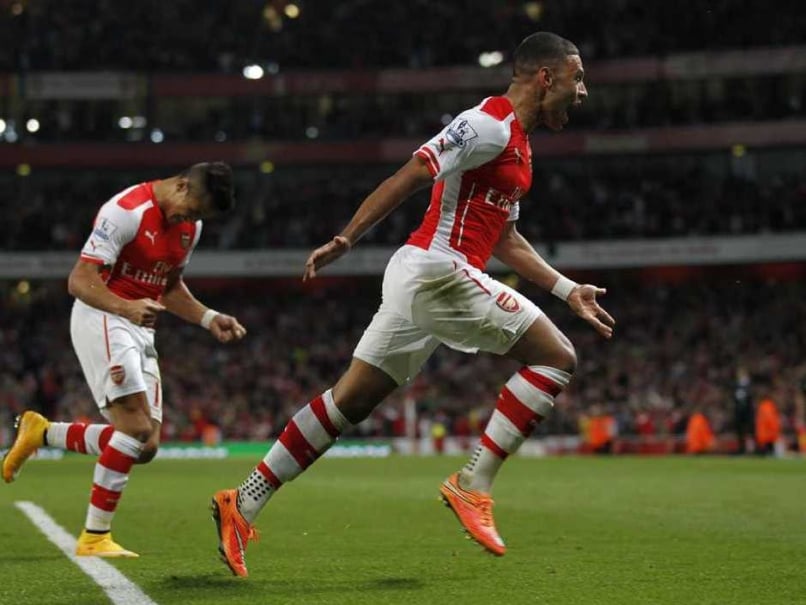 Arsenal's English striker Alex Oxlade-Chamberlain (R) celebrates scoring a goal during the English Premier League football match between Arsenal and Tottenham Hotspur at The Emirates Stadium in London on on September 27, 2014.© AFP
London:

Alex Oxlade-Chamberlain's equaliser in the second half gave Arsenal a 1-1 draw against Tottenham in the English Premier League on Saturday.

Spurs forward Erik Lamela failed to clear in the 74th minute and the ball ricocheted around the penalty area before falling to Oxlade-Chamberlain, who lashed the ball in from close range. Lamela put his face in his hands after the goal in the north London derby, whose result leaves Spurs winless in four matches.

"1-0 down in a derby is always a bit nerve-wracking," Oxlade-Chamberlain said. "So we did well to come back."

Tottenham went ahead in the 56th when Nacer Chadli scored after Arsenal midfielder Mathieu Flamini lost possession in a dangerous area. The ball was collected by Christian Eriksen, who laid it off to Lamela. His throughball split open the Arsenal defense, and Chadli slotted the ball into the bottom left corner.

Chadli was later booked for his goal celebration after putting his hands to his ears while running past a section of Arsenal supporters.

Spurs' recent results are putting pressure on new manager Mauricio Pochettino. But Tottenham moved up a place to eighth, while Arsenal remained unbeaten and in fourth after six matches.

Wenger said both players will be out for at least a week and will miss a Champions League match on Wednesday and a league match against Chelsea on Sunday. Jack Wilshere also took a knock to his right ankle, but Wenger was hesitant to rule out the midfielder.

Arsenal dominated the opening stages, with Danny Welbeck looking lively. The forward had a low shot on the turn saved by Hugo Lloris. Earlier, Welbeck turned past Jan Vertonghen and sprinted down the right. Finding little support, he fired a shot but it was blocked by Younes Kaboul and went out for a corner.

Oxlade-Chamberlain, who also had a bright first half, forced a diving save from Lloris, who pushed the ball away from slipping inside the far post.

Spurs enjoyed a good spell of possession late in the first half, winning a couple of corners. But their finishing lacked a cutting edge.

While Arsenal is unbeaten in the league, the Gunners have come away with four draws - a situation Wenger said needs to be improved. But he highlighted that Arsenal fought back and had about 70 per cent possession against Spurs.

"I must give credit to my team because once again we came back," Wenger said. "It was a high work rate. It was one of the few times we had so much possession against Tottenham since I've been here."

Wenger was also frustrated at Spurs' tactics, which he said included defending deep and time-wasting.

"They tried to gain time," Wenger said. "They tried to slow down the game. The referee is there to make the flow of the game respected. People pay money in the stands to watch football. It's as simple as that."

But Pochettino said while he didn't know if his team could be accused of time-wasting, it was his intention for his team to defend deep.

"It was our strategy to play compact, a little bit deep," he said. "We did well. We need to improve our style, but we need time. I'm only in the job three months."

Comments
Topics mentioned in this article
Arsenal Tottenham Hotspur Erik Lamela Alex Oxlade-Chamberlain Football
Get the latest updates on SA vs IND 2021-22, check out the Schedule and Live Score . Like us on Facebook or follow us on Twitter for more sports updates. You can also download the NDTV Cricket app for Android or iOS.