Penn Orji and captain Mehtab Hossain chipped in with a goal each as East Bengal thrashed Yangon United of Myanmar 5-1 at the Salt Lake Stadium on Wednesday. 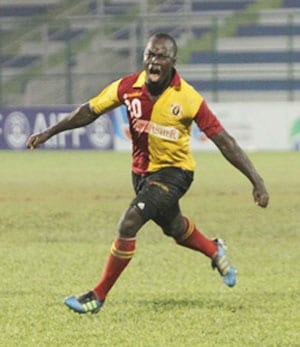 Nigerian Edeh Chidi struck a hat-trick and set up a couple more as East Bengal thrashed Yangon United of Myanmar 5-1 to enter the AFC Cup quarter-final for the second time since 2004.

It was Chidi (25th, 71st and 76th munite) who made his presence felt with a treble while Penn Orji (2nd) and captain Mehtab Hossain (48th) chipped in with a goal each much to the delight of the 10,000-odd spectators who had gathered at the Salt Lake Stadium on Wednesday.

CEast Bengal dazzled in what will be remembered as one of the most memorable days in Indian club football as the team entered the last eight of Asian Tier-II continental event.

The Trevor Morgan coached side might have had a disappointing finish in the I-League slipping to third spot, but the Scot ensured that the boys kept their impeccable record against international teams intact as Chidi set up Penn Orji for a second minute strike.

Forward Adama Kone, who had a tally of nine goals prior to this match, was brilliantly marked by a resolute East Bengal defence as Yangon United managed only a consolation goal through Cezar Augusto in the 78th minute.

The visitors tried to play long balls with Kone up front but the East Bengal defence were alert thwarting the Ivory Coast forward's every attempt.

A minute after Lalrindika Ralte's shot was blocked by the Yangon United defence, Chidi put his name on the board after Andrew Barisic and Penn set it up for the Nigerian.

East Bengal began the second-half with the same precision as the captain Hossain made it 3-0 with a superb shot .

Naoba Singh fed Chidi with a quality ball near the penalty spot as the Nigerian brought up his second goal giving East Bengal a commanding 4-0 lead midway into the second-half.

Continuing his fine run, Chidi brought up his hat trick in style that gave East Bengal a five-star lead in the action-packed second-half.

Just when Yangon United had all but given up, Augusto scored a consolation goal after getting a fine cross from the left flank.