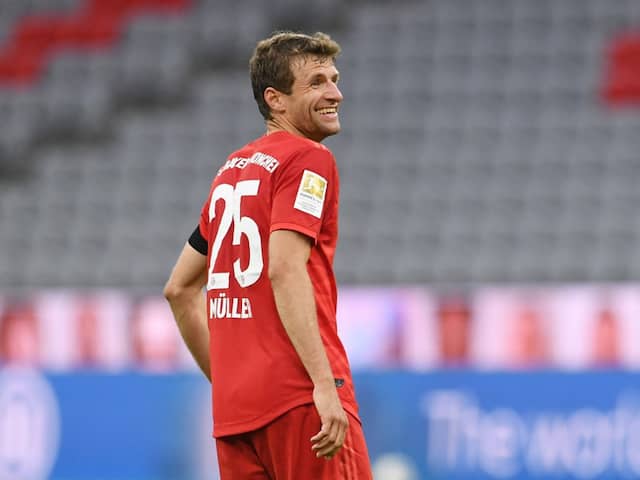 Bayern Munich striker Thomas Mueller expects sparks to fly in Tuesday's behind closed doors, top-of-the-table clash at Borussia Dortmund which could help settle this season's title race. Mueller scored in Bayern's 5-2 home win over Eintracht Frankfurt on Saturday while second-placed Dortmund stayed four points behind after their a 2-0 win at Wolfsburg. Dortmund's Signal Iduna Park would usually be sold out with 82,000 fans creating an electric atmosphere for the showdown. However, the terraces will remain empty for the visit of Bayern due to the strict hygiene measures the German league insists on during the coronavirus pandemic.

"We don't really know how to get into these games without spectators, but I expect us, and myself, to go to our limits anyway," Mueller told Sky after the thumping of Frankfurt.

"Of course, we'd like to have the fans there.

"There's nothing more beautiful than playing these matches against Dortmund at the Allianz Arena or in Dortmund," he added.

"But that's our job, and we're going to show that even without spectators we're capable of playing football with passion".

A win in Dortmund could leave them seven points clear with six games left.

Bayern crushed Dortmund 4-0 when the teams met at the Allianz Arena in November.

However, since then Dortmund have signed Norwegian goal-ace Erling Braut Haaland, who has scored ten goals in as many league games.

Likewise, Bayern's star striker Robert Lewandowski will be looking to add to his phenomenal tally of 27 goals in 23 league games against his former club.

"When the top team plays against the second one, well if it's not a top-match then I don't know what is," said Bayern head coach Hansi Flick.

Thomas Muller Football
Get the latest updates on IPL 2020, check out the IPL Schedule for 2020 and Indian Premier League (IPL) Cricket live score . Like us on Facebook or follow us on Twitter for more sports updates. You can also download the NDTV Cricket app for Android or iOS.