Captain Didier Drogba was among the scorers as title favourites Ivory Coast warmed up for the 2013 Africa Cup of Nations with a 3-0 friendly victory in Austria on Wednesday. 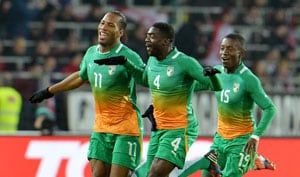 Captain Didier Drogba was among the scorers as title favourites Ivory Coast warmed up for the 2013 Africa Cup of Nations with a 3-0 friendly victory in Austria on Wednesday.

Veteran striker Drogba, who moved to China last year after helping Chelsea win a maiden Champions League title, scored on 61 minutes in Linz to put the Elephants two goals ahead.

Lacina Traore completed a comfortable win for the No 1 ranked African national football team with a goal 14 minutes from time after Didier Ya Konan opened the scoring just before half-time.

It was an encouraging result for the Ivorians, who lacked injured Arsenal forward Gervinho, as they seek a second Cup of Nations title in South Africa next February.

But to conquer Africa, Ivory Coast must ditch a 'chokers' tag after losing two of the last four finals against hosts Egypt and surprise package Zambia following penalty shootouts.

Drogba said last month that the 2013 Cup of Nations will be his last, and it is also likely to be the final shot at glory for ageing stars like Kolo Toure and Didier Zokora.

While Ivory Coast are 53 places above Austria on the FIFA world rankings, the ease with which they succeeded can only boost morale ahead of a January 22 Cup of Nations opener against Togo in Rustenburg.

Defending champions Zambia deserved to defeat South Africa more comfortably than 1-0 in Johannesburg on a Soccer City pitch in poor condition after a rock concert at the venue last weekend.

Recalled striker Collins Mbesuma struck the mid-second half winner with a fierce shot from just outside the box and he should have won a penalty when brought down by Bafana Bafana (The Boys) captain Bongani Khumalo.

Substitute James Chamanga missed a sitter for Zambia, who lacked injured midfielder Rainford Kalaba from the team that pipped Ivory Coast on penalties for the African crown in Libreville last February.

Ghana, desperate for a first Cup of Nations title in 31 years after finishing fourth, second and third in the last three tournaments, defeated shock 2013 qualifers Cape Verde Islands 1-0 in Lisbon.

Spain-based Mubarak Wakasu snatched the winner on 64 minutes as Ghana rested many first choices and captain Asamoah Gyan was unavailable after a family loss.

Among those who started for the Black Stars were teenage Inter Milan midfielder John Duncan and striker Abdul Majeed Warris, who joined Spartak Moscow on a five-year contract last weekend.

Togo surprised Morocco 1-0 in Casablanca courtesy of a second-half goal from Tottenham Hotspur striker Emmanuel Adebayor, and Algeria and Tunisia also lost at home on a bad night for North Africa.

Comments
Topics mentioned in this article
Football Didier Drogba
Get the latest Cricket news, check out the India cricket schedule, Cricket live score . Like us on Facebook or follow us on Twitter for more sports updates. You can also download the NDTV Cricket app for Android or iOS.