Jermain Defoe has told England coach Roy Hodgson that he is capable of leading the attack in the absence of Wayne Rooney and Andy Carroll. 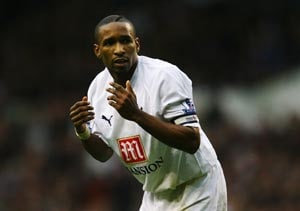 Jermain Defoe has told England coach Roy Hodgson that he is capable of leading the attack in the absence of Wayne Rooney and Andy Carroll.

With Rooney sidelined with a gashed thigh and Carroll ruled out with a hamstring injury, Hodgson will have fewer options than he would like when it comes to selecting his forward line for Friday's opening World Cup qualifier in Moldova.

Hodgson has gone with a lone striker in most of his England matches and that doesn't seem the perfect fit for Defoe, whose diminutive stature isn't ideally suited to the physical demands of taking on two imposing centre-backs.

But the injuries mean Hodgson may have no choice but to go with Defoe and the Tottenham forward, who scored a superb goal in England's last match, a 2-1 friendly win over Italy, is convinced he is up to the challenge after playing the same role for his club this season.

"I have been playing the lone striker for my club and I have enjoyed it," Defoe said.

"To be honest playing with good players it is not really a problem if people get close.

"It we get to control the game in midfield when we get a chance we have to take it."

England will be firm favourites to kick off their qualifying campaign with a victory no matter who Hodgson selects as his striker, but Defoe cautioned his team-mates to guard against complacency.

The Moldovans will be desperate to spring an upset and Defoe believes the key to avoiding an embarrassment is to deliver an early statement of intent with the first goal.

"They will make it hard and sit behind the ball and try to frustrate us," Defoe said. "I have played in a number of games against the so-called smaller countries and it's difficult to get the first goal.

"You look at the fixtures and some might think it should be an easy game. It's important to be professional and patient and it helps when you get an early goal.

"It's going to be difficult and the first 20 minutes will be really important. They're two big games and if we can win them it will be good for everyone."

Meanwhile, Defoe's England colleague Alex Oxlade-Chamberlain insists the onus is on the rest of the side to help out the sole striker against Moldova and in the following week's qualifier against Ukraine at Wembley.

"There's goals all over the team. I think Phil Jagielka scored in the last game.

"We'll be all looking to score. I don't think there's too much pressure on one individual position."

Arsenal midfielder Oxlade-Chamberlain got his first taste of competitive international football during Euro 2012 -- when he was a surprise call-up to the squad -- and the teenager admits he is still coming to terms with life as an England player.

"I'm not sure yet what to expect," he said. "I'm just looking forward to it and if I do get the shout I'll do my best.

"You can never rest on your laurels otherwise I won't get back in these squads. Going to the Euros has made me want to get into as many squads as possible."