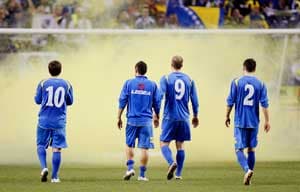 FIFA and UEFA have threatened to exclude Bosnia from international competition unless it accepted changes aimed at replacing the NSBIH's ethnic-based tripartite presidency by a single president.

The NSBIH rejected the demanded changes in July but FIFA and UEFA have given them until March 31 to change their minds.

Meanwhile, an NSBIH spokeswoman told AFP in Sarajevo that the federation's assembly was to meet again on March 29, two days before the deadline expires, for a new vote.

The Serb member of the NSBIH's presidency Bogdan Ceko said it was "difficult to forecast" the outcome of the vote.

"The new delegates (of the NSBIH assembly) were elected (since the last vote) and I'm rather optimistic, but it does not depend on me," he told AFP.

The NSBIH assembly has 60 delegates, 20 from each of Bosnia's three ethnic communities - Croat, Muslim and Serb.

Comments
Topics mentioned in this article
Football Bosnia-Herzegovina
Get the latest updates on ICC T20 Worldcup 2022 and CWG 2022 check out the Schedule, Live Score and Medals Tally. Like us on Facebook or follow us on Twitter for more sports updates. You can also download the NDTV Cricket app for Android or iOS.