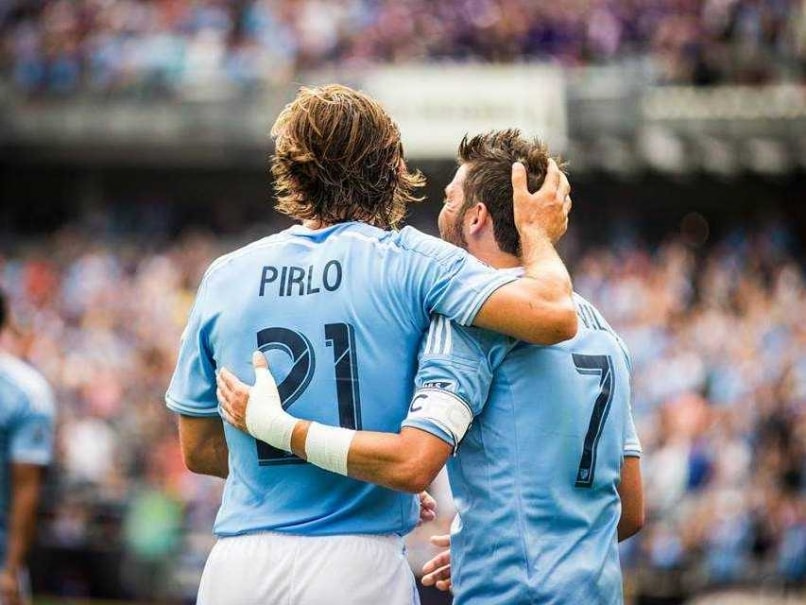 Pirlo, a 36-year-old World Cup-winning midfielder who enjoyed star turns at AC Milan -- where he won two Champions League titles and for the past four seasons at Juventus where he won four Serie A crowns -- was the center of attention in the match at Yankee Stadium between the two MLS expansion clubs. (Rival Kings Rumble as Chelsea Test Barcelona)

Chants of "We want Pirlo!" were answered in the 57th minute, when the Italian entered the game to a standing ovation from the crowd of 32,041.

He spoke briefly to former Milan team-mate and now Orlando star Kaka then settled in quickly, his deft touch enchanting fans who cheered his every touch of the ball. (Barcelona to Appeal UEFA Fine)

"It was very emotional when I got on the pitch," Pirlo said. "Despite the heat, it felt great. Since we won, it's even better."

"Special, special player, obviously, a guy who sees passes that most of us don't, who can really open up the game," New York city coach Jason Kreis said.

"From what I saw right away is our team opening up and really using every ounce of space out there because they felt like he could find them."

But it was Villa who was the main difference-maker.

Villa's first strike gave the hosts a 1-0 lead on the stroke of halftime, controlling a ball from Angelino with one touch, turning and blasting a right-footed shot past Orlando keeper Tally Hall.

His second goal in the 67th minute saw NYCFC edge ahead 3-2, Villa's strike from the top of the penalty area taking a deflection past Hall.

Thomas McNamara made it 4-2 just four minutes later after Pirlo threaded a ball to Kwado Poku, who found McNamara.

Javier Calle also scored for New York City, in the 53rd minute, and after Kaka hit the post with a free kick in injury time Mix Diskerud tacked on one more for the home side to complete the triumph.

Only one thing was lacking to make New York fans' satisfaction complete.

Former England international Frank Lampard again saw his debut delayed because of a nagging calf injury, which will also keep the 37-year-old midfielder out of next week's MLS All-Star game against Tottenham in Denver.

Comments
Topics mentioned in this article
David Villa Andrea Pirlo Football
Get the latest updates on T20 World Cup, check out the T20 World Cup Schedule and Live Score . Like us on Facebook or follow us on Twitter for more sports updates. You can also download the NDTV Cricket app for Android or iOS.