David and Victoria Beckham to auction off belongings

The A-list couple plan to sell some of their most prized possessions in a charity auction held at their 12-acre estate in Hertfordshire, known as 'Beckingham Palace', before downsizing for a plush London pad, reported Daily Mirror. 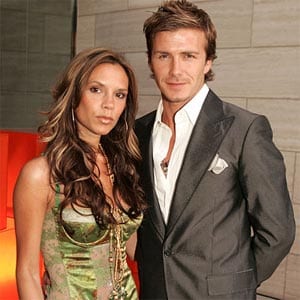 Soccer player David and wife Victoria Beckham are hosting a charity auction at 'Beckingham Palace' to get rid of their designer clutter before downsizing to a London house.

The A-list couple plan to sell some of their most prized possessions in a charity auction held at their 12-acre estate in Hertfordshire, known as 'Beckingham Palace', before downsizing for a plush London pad, reported Daily Mirror.

"After deciding to sell Beckingham Palace, David and Victoria realised there was no way they could fit all their belongings into one, smaller pad. They have shipped a few treasured items to California and given some things to their families but there is still loads left. Victoria had the brilliant idea to sell it off for charity and now wants to host a massive auction at 'Beckingham Palace'. (Also read: Ferguson says Beckham lost focus after marriage)

"The house has been the scene of many fund-raising dos - the World Cup party, her 'full length & fabulous' ball, children's tea parties and so forth - so why not host a farewell auction there too? There will be some amazing stuff for sale so she hopes to raise thousands," a source said.

The couple are selling off kitchen items, household appliances, designer clothing and their world-famous gold wedding thrones, which took pride of place during their 1999 wedding ceremony.

Dozens of items have already been shipped to their new 45 million pounds four-storey London townhouse. Design pro Kelly Hoppen has given the posh pad a makeover ahead of their move in date.

Comments
Topics mentioned in this article
Football Victoria Beckham
Get the latest updates on ICC T20 Worldcup 2022 and CWG 2022 check out the Schedule, Live Score and Medals Tally. Like us on Facebook or follow us on Twitter for more sports updates. You can also download the NDTV Cricket app for Android or iOS.