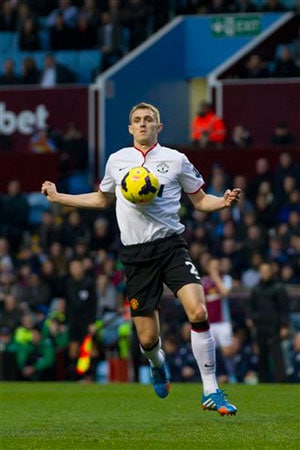 Darren Fletcher's 15-year Manchester United career came to an end on Monday as West Bromwich Albion announced that they had signed the Scotland captain on a free transfer.

The 31-year-old midfielder first joined United as a schoolboy and made 342 appearances for the club, scoring 24 goals.

But after falling our of favour under new United manager Louis van Gaal, he signed for West Brom on a two-and-a-half-year contract with an option for a further year.

An industrious central midfielder, Fletcher came through United's youth academy and made his debut for the first team in March 2003.

During his time at United, he won five Premier League titles, two League Cups, the Champions League and the FIFA Club World Cup, as well as making 66 appearances for Scotland and scoring five goals.

In December 2011 he began an extended break from football after being diagnosed with a chronic bowel condition, but after a brief return in late 2012, he made a successful comeback last season.

In a statement on Twitter, United said: "Darren Fletcher has joined West Brom after 342 #mufc appearances. #thankyoufletch for your fantastic service."

Comments
Topics mentioned in this article
Darren Fletcher Manchester United Football
Get the latest updates on T20 World Cup, check out the T20 World Cup Schedule and Live Score . Like us on Facebook or follow us on Twitter for more sports updates. You can also download the NDTV Cricket app for Android or iOS.