Czechs to face Scotland without Cech 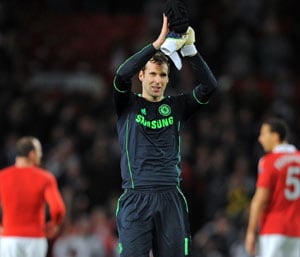 Cech was ruled out for three to four weeks after injuring a knee ligament in training with Chelsea last week.

Coach Michal Bilek called three 'keepers on Tuesday to his 22-man squad for the Sept. 3 match at Scotland. Two of them are newcomers - Jan Lastuvka and Ales Hruska - plus Jaroslav Drobny of Hamburg, who has played four internationals.

Captain Tomas Rosicky, who missed Arsenal's loss to Liverpool in the English Premier League last weekend due to a thigh problem, is expected to be fit.

The Czechs are second in Group I with nine points, six behind Spain. A victory would boost their chances of advancing to the playoffs.

Comments
Topics mentioned in this article
Football Czech Republic Scotland
Get the latest updates on IPL 2020, check out the IPL Schedule for 2020 and Indian Premier League (IPL) Cricket live score . Like us on Facebook or follow us on Twitter for more sports updates. You can also download the NDTV Cricket app for Android or iOS.