Cristiano Ronaldo missed Real Madrid's 0-0 draw against Manchester City in the Champions League semifinal first leg due to a thigh injury, but took a full part in training on Monday and Tuesday 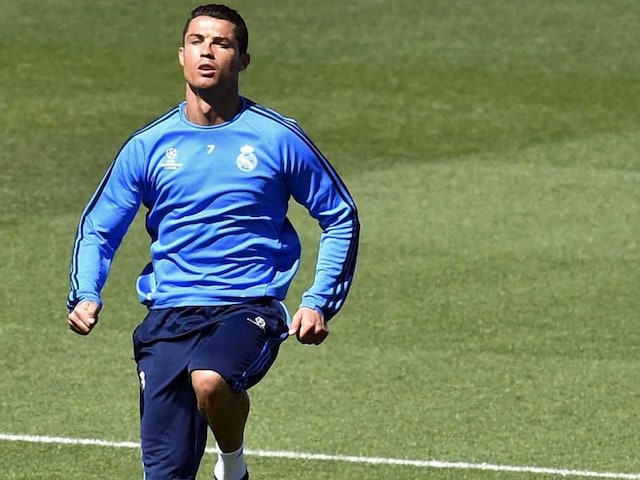 Ronaldo missed last week's 0-0 draw in the first leg due to a thigh injury, but took a full part in training on Monday and Tuesday.

However, Zidane confirmed that Madrid will be missing two other key players in striker Karim Benzema and defensive midfielder Casemiro through injury.

"Cristiano is fine, he is 100 percent, that is why he trained this week and will be there tomorrow," Zidane said on Tuesday.

"Karim and Casemiro are another thing. In the scan today Karim still has a problem and we don't want to risk him.

"The same with Casemiro. He doesn't have a serious injury but it is a dilemma and we also don't want to risk him.

"We have a sufficient squad so that the rest can play."

Zidane also claimed Ronaldo was 100 percent on the eve of the first leg before the Portuguese was finally forced to miss out after feeling the recurrence of the muscle injury he picked up against Villarreal two weeks ago.

However, having also sat out Real's Gareth Bale-inspired 1-0 win at Real Sociedad on Saturday, Zidane is confident Ronaldo will be ready for another famous European night at the Santiago Bernabeu after scoring a hat-trick to overturn a 2-0 first leg deficit against Wolfsburg in the quarter-finals.

Indeed, Ronaldo could break his own record for goals in a Champions League campaign from two years ago of 17 having hit 16 in just 10 appearances this season.

"It has been over a week and little-by-little he has been recovering. He is a player like that, he recovers quickly," added Zidane.

"We need Cristiano at 100 percent because he is a different player, as his numbers show.

"I would have liked Karim to be fit too, but it is not to be and others will play."

In the absence of Benzema, Ronaldo is expected to play in a central striking role flanked by the in-form Bale and Lucas Vazquez.

However, City coach Manuel Pellegrini -- who managed Ronaldo in his one year in charge at the Bernabeu in 2009/10 season -- insisted his side can't be too obsessed by stopping Ronaldo as they look to make history by reaching a first ever Champions League final.

"Cristiano scores a lot of goals, you see the amount of goals he scored in six years here," said Pellegrini.

"But Real Madrid is not just Cristiano, if he doesn't play they have other options.

"The most important thing is to work as a team defending and attacking against Real Madrid not just Cristiano."

And the Chilean refuted suggestions City will be extra motivated by the dismissive attitude towards City's chances of reaching the final in the Spanish press in recent days.

"I think we have the motivation, we must not be thinking about that," he added.

"Our aim must be to try and reach the final we never reached before and to play against a great time like Real Madrid in a beautiful stadium."

Pellegrini confirmed that City will be without Spanish international David Silva and Pablo Zabaleta through injury.

However, Yaya Toure is fit to return after a thigh injury.

Zidane has inspired a huge turnaround in Madrid's fortunes since taking charge in January, winning 18 of his 23 games in charge to lead Madrid to a sixth consecutive semi-final and to within a point of La Liga leaders Barcelona with two games to play.

However, he admitted that it would now be considered a failure for Real not to reach their 14th European Cup final.

"Until now we haven't won anything. We are in good form, but our idea is to try to be at our best tomorrow to get through the tie.

"It is very difficult, but it is a clear failure if we don't get through."

Comments
Topics mentioned in this article
Real Madrid Manchester City Cristiano Ronaldo Karim Benzema Gareth Bale David Silva Yaya Toure Football
Get the latest Cricket news, check out the India cricket schedule, Cricket live score . Like us on Facebook or follow us on Twitter for more sports updates. You can also download the NDTV Cricket app for Android or iOS.