The Copa America match between Colombia vs Paraguay was delayed by a few second after the coin used for the toss landed on its edge. 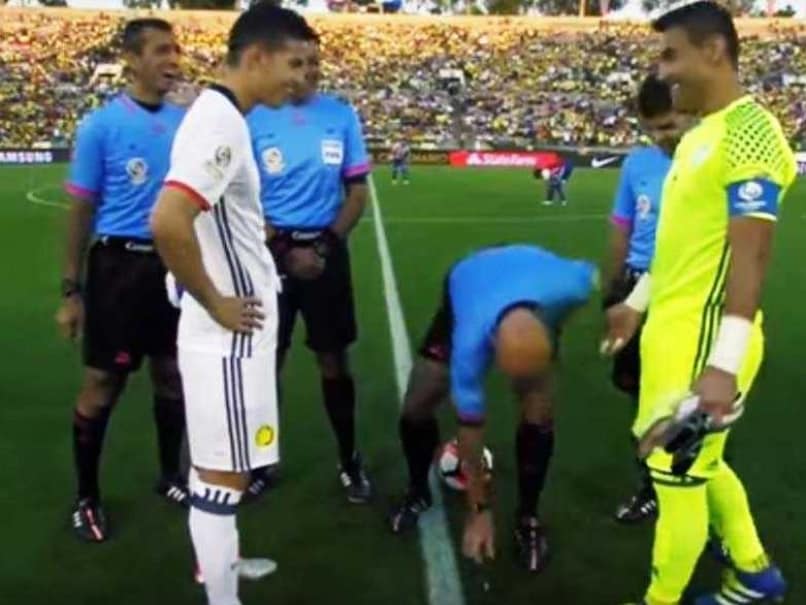 The Copa America match between Colombia and Paraguay was delayed after the toss coin landed on the edge. (Picture credit: Youtube)

A bizarre incident during the toss brought a few seconds of smile ahead of the crucial Copa America match between Colombia and Paraguay at the Rose Bowl, Pasadena on Tuesday night.

The start of the Copa American match was delayed by a few seconds when the coin used for the toss, spun in the air, fell and landed on its edge. The four match officials and the captains of Colombia and Paraguay had a good laugh before the toss was done again.

Copa America uses a specially minted coin for the toss. It is not an usual currency coin.

A coin landing on its edge is not unheard of. According to www.sbnation.com, a 1993 experiment conducted by two physicists showed than an American nickel will land on its edge once every 6,000 tosses!

Colombia became the first team to advance to the knockout rounds after they beat Paraguay 2-1 in a rather ill-tempered match.

Comments
Topics mentioned in this article
Colombia Paraguay Football
Get the latest updates on India vs England Series, India vs England , live score and IPL 2021 Auction . Like us on Facebook or follow us on Twitter for more sports updates. You can also download the NDTV Cricket app for Android or iOS.