Bayern Munich star Vidal struck from the spot in the 10th minute of time added on after a hugely debatable penalty was awarded against Bolivian defender Luis Gutierrez for handball by US referee Jair Marrufo.

Television replays showed Gutierrez had his right arm behind his back to avoid conceding a handball but Alexis Sanchez's cross struck him on the shoulder and Marrufo pointed to the spot after the apparent intervention of the linesman.

Bolivia's players surrounded the referee for angry protests but Marrufo's decision stood and it was left to Vidal to drive home the penalty.

The result gives Chile hope of reaching the last eight following their opening defeat to Argentina in Group D.

Earlier a stunning 61st minute free-kick from Kuwait-based playmaker Jhasmani Campos appeared to have grabbed a share of the points for Bolivia at Gillette Stadium after Vidal had given Chile the lead just after half-time. 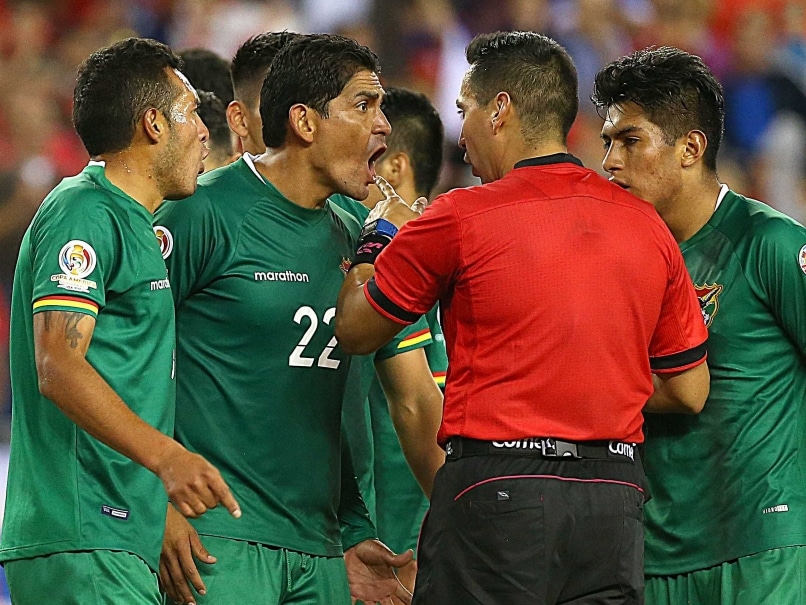 Bolivia's players protest angrily against referee Jair Marrufo as he awarded a controversial penalty to Chile.

Bolivia, beaten by Panama in their first match, have zero points from two games.

It looked like being a frustrating evening at Foxborough for the Chileans, who dominated possession and territory but were unable to make their advantage count until the referee's late intervention.

After a scrappy first half, Chile looked to have taken a decisive breakthrough immediately after the restart with Vidal's goal.

Pinilla looked up and squared for Vidal who swept in an emphatic finish to make it 1-0 on 46 minutes.

Yet Bolivia got back on level terms after Chile conceded a free-kick from around 25 meters, slightly out to the right.

There appeared to be little danger but Campos stepped up and produced a spectacular long-range strike which curled late before dipping into the top corner beyond the fingertips of Barcelona goalkeeper Claudio Bravo.