Confederations Cup: Spain off to flyer against Uruguay

The Spaniards dominated throughout but after Pedro Rodriguez's opener deflected had cause to be grateful to Pedro Soldado's 32nd-minute clincher as Luis Suarez netted a late freekick for the Uruguayans. 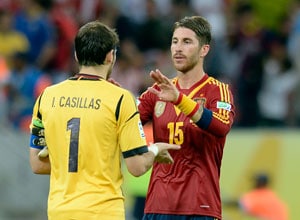 World champions Spain got their Confederations Cup campaign off to a winning start on Sunday with a 2-1 win over South American champions Uruguay in the northern Brazilian city of Recife.

The Spaniards dominated throughout but after Pedro Rodriguez's opener deflected had cause to be grateful to Pedro Soldado's 32nd-minute clincher as Luis Suarez netted a late freekick for the Uruguayans.

Cesc Fabregas came within the width of a post from giving Spain the lead in the 10th minute with a low strike before the favourites made the breakthrough after just 20 minutes -- Lady Luck smiling on them as Diego Lugano deflected home Pedro's shot to bamboozle keeper Fernando Muslera.

As is their habit, Spain were giving the Uruguayans almost no chance to touch the ball in the opening quarter and Xavi almost made it two when he sent a freekick whizzing just off target after 26 minutes.

Without the ball, Uruguay grew frustrated and resorted to some strong-arm tactics as first Edinson Cavani earned a booking for clattering into Sergio Ramos as they challenged for a header.

Suarez, in the news for intimating he would be partial to a move from Liverpool to Real Madrid, tried to rally the Celeste, who qualified for this event by winning the 2011 Copa America in Argentina, finding Cavani with a freekick, but the latter's header was too close to Iker Casillas.

Spain coach Vicente Del Bosque elected to keep faith with his veteran keeper despite Casillas missing a chunk of the second half of the season through injury -- once he had recovered the then Real coach Jose Mourinho left him on the bench.

After 32 minutes it was 2-0 courtesy of beautiful vision from Fabregas, who shimmied away from two defenders, then played in Soldado, who took one touch before drilling the ball into the roof of the net.

Uruguay made a change at the break with Ramirez giving way to Alvaro Gonzalez but Spain were still on fire as Xavi and Iniesta interlinked brilliantly before Xavi's flick fed Pedro and his cross just eluded the diving Soldado.

Pedro then mishit an effort wide after a neat Fabregas through ball sent Alba into space.

That sparked a revival of sorts for the South Americans and Suarez drove home a curling freekick with two minutes remaining to give the scoreline a more respectable look.

Spain came to the event having already become the only team in history to win three major events on the bounce - the 2010 World Cup sandwiched by Euro 2008 and 2012.

A win in this dress rehearsal for next year's World Cup finals in Brazil would see the Spanish join Argentina and France as the only countries to win the trio of World Cup, the Olympics and the Confederations Cup.