Bafetimbi Gomis and Bakary Kone both scored in the first-half as Lyon beat Dinamo Zagreb 2-0 at the Stade de Gerland on Tuesday in their 100th Champions League game. 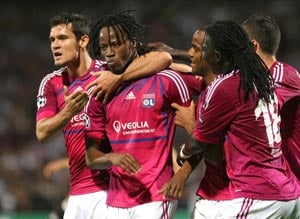 Bafetimbi Gomis and Bakary Kone both scored in the first-half as Lyon beat Dinamo Zagreb 2-0 at the Stade de Gerland on Tuesday in their 100th Champions League game.

The win allows OL to continue their fine start to the season under Remi Garde and consolidates their grip on second place in group D on four points, two behind Real Madrid.

Dinamo have utterly dominated Croatian football over the last decade, but this is their first Champions League campaign in 12 years, and while they ran group favourites Madrid close in a 1-0 defeat a fortnight ago, Lyon's extra experience at this level told.

Garde is without the likes of Yoann Gourcuff and Lisandro Lopez due to injury, but the form of Michel Bastos and Gomis in particular means they have not been overly missed.

Gomis blazed over from six yards with the first chance of the game in the third minute, and Maxime Gonalons then fired over after Dinamo goalkeeper Ivan Kelava had flapped at a corner.

The hosts then got the opening goal that their enterprising play deserved midway through the first half, although they had Dinamo midfielder Nikola Pokrivac to thank for creating the chance.

The Croatian international, who had a spell in Ligue 1 with Monaco in 2008-09, inexplicably played the ball back towards his own goal while under pressure in the centre circle, and Gomis latched on to the loose ball before beating Kelava with a magnificent chip.

It was his eighth goal in all competitions this season.

The visitors briefly threatened a response, and Fatos Beqiraj was just unable to get to a Luis Ibanez cross from the left when any connection would probably have beaten Hugo Lloris.

OL then went on to double their lead three minutes before the interval when Kone scored his second European goal of the season, stabbing into an empty net after the visitors' defence had made a meal of dealing with a Clement Grenier corner.

They could even have scored a third right on half-time, only for the excellent Grenier to be denied by Kelava after being picked out by Kim Kallstrom.

The game had effectively been killed off at 2-0, though, and Lyon were only sporadically put under pressure in the second-half.

Kallstrom made a crucial block from Domagoj Vida's close-range effort 20 minutes from time before Lloris saved a Tonel header from the resulting corner.

The France goalkeeper then reacted well to keep out a Jerko Leko shot as OL comfortably closed the game out.

Garde's men can now look forward to a double-header with Real Madrid that will provide a better indication of just how far this exciting young team can go on the continental stage this season.

Comments
Topics mentioned in this article
Football Dinamo Zagreb Lyon
Get the latest Cricket news, check out the India cricket schedule, Cricket live score . Like us on Facebook or follow us on Twitter for more sports updates. You can also download the NDTV Cricket app for Android or iOS.