Next Thursday, the Bundesliga trio of Bayern Munich, Borussia Dortmund and Schalke 04 will discover their Champions League last 16 opponents after all three finished top of their groups. 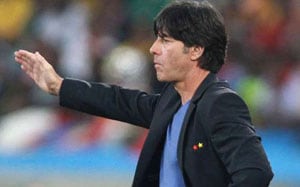 With a record seven Bundesliga teams in the knock-out stages of either the Champions League or Europa League, Germany's European success can only help the national side, boss Joachim Loew has said.

"It has always been my wish that we would have more teams in the knock-out stages than just Bayern Munich," Germany's head coach Loew said in Berlin on Thursday.

"For the players, it is very important to gather these experiences. It's a good basis for next year."

For the first time, seven German clubs will be involved when the knock-out phase of both the Champions League and Europa League are drawn at UEFA's headquarters in Nyon, Switzerland on December 20.

Next Thursday, the Bundesliga trio of Bayern Munich, Borussia Dortmund and Schalke 04 will discover their Champions League last 16 opponents after all three finished top of their groups.

And Bayer Leverkusen, Hanover 96, VFB Stuttgart and Borussia Moenchengladbach will go into the hat when the Round of 32 draw for the Europa League is made the same day.

The German national team is top of their qualifying group for the 2014 World Cup in Brazil with a three-point lead over second-placed Sweden, who have a game in hand.

Germany play their first international of 2013 against France in Paris on February 6 in a friendly, then take on Kazakhstan in home and away World Cup qualifiers in March.

Comments
Topics mentioned in this article
Football VfB Stuttgart Borussia Dortmund Bayer Leverkusen
Get the latest updates on India vs South Africa and check out  Schedule, Results and Live Score. Like us on Facebook or follow us on Twitter for more sports updates. You can also download the NDTV Cricket app for Android or iOS.