Christian Pulisic scored his fourth goal in two Premier League games on Saturday, a week on from becoming the youngest Chelsea player ever to score a hat-trick. 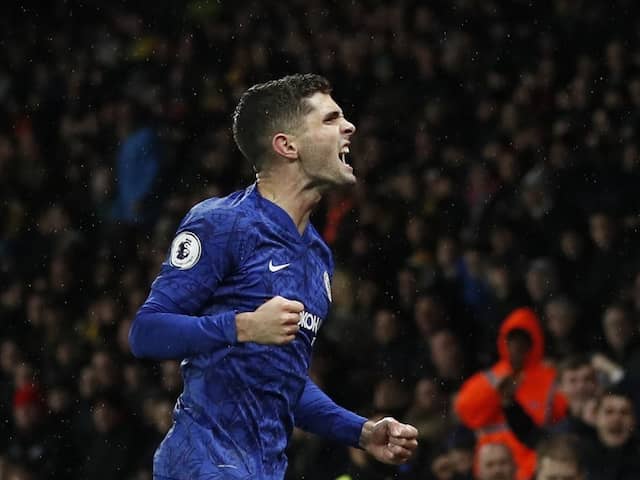 Christian Pulisic had to be patient in the early months of his Chelsea career, but the United States captain and talisman now has the chance to make his mark on the Champions League after earning his place in a rapidly rising side. Christian Pulisic scored his fourth goal in two Premier League games to secure a 2-1 win at Watford on Saturday, a week on from becoming the youngest Chelsea player ever to score a hat-trick in a 4-2 victory at Burnley. The fortnight that changed the course of the 21-year-old's first season in England began in the Champions League against Ajax, when he came off the bench to set up Michy Batshuayi's winner at the Johan Cruyff Arena and inflict a first defeat since May on the Dutch champions.

Prior to that Pulisic had been forced largely to wait on the sidelines at Chelsea since his switch to West London.

Ajax travel to Stamford Bridge on Tuesday seeking revenge, but for the first time this season Pulisic is set to start in Europe's top club competition with his impact in recent weeks impossible for Frank Lampard to ignore any longer.

"If he continues doing that sort of thing then the goals will rack up," said Lampard after Pulisic followed up his hat-trick with a predatory goal from close range at Watford. "His general performance was top as well."

Victory at Vicarage Road saw Chelsea equal a club record for seven straight away wins with Lampard earning plaudits for his ability to quickly turn the negativity of a summer transfer ban and the loss of Eden Hazard into a buoyant atmosphere at Stamford Bridge.

Pulisic was the one big money arrival. Chelsea anticipated both the 12-month ban on signing players and Hazard's departure to Real Madrid by completing his signing for 58 million pounds (USD 75 million) in January before being loaned back to Borussia Dortmund for the second half of last season.

However, that move left the Pennsylvanian in limbo in Germany with his time at Dortmund coming to an end and the rise of English wonder kid Jadon Sancho limiting his first team appearances.

A move to London was meant to be a fresh start, but after a start as Chelsea lost the UEFA Super Cup to Liverpool on penalties in August, Pulisic soon found himself behind Willian, Pedro Rodriguez and Callum Hudson-Odoi in the battle for places on the wings of Lampard's three-man attack.

For eight consecutive Premier League and Champions League games, Pulisic was left out by Lampard, the low point of which came when he failed to even make the squad for a 2-1 win at Lille last month.

"You want to play, be on the field and be in the team as much as you can and it hurt not to be there," admitted Pulisic on Lampard's snub in northern France.

However, amidst his price tag and the array of other talented youngsters making an impact at Chelsea this season, Pulisic's own tender age was often over-looked.

"He's a hot topic because of the price tag and his status in his national team, and his world status through that.

"Everyone has got a little bit carried away with the short term. The long term is that he's come here and he's just turned 21," said Lampard after an encouraging cameo off the bench against Newcastle three weeks ago.

Lampard was also wary that Pulisic's presence at the Gold Cup for his country in the summer meant he had just one week off before starting pre-season and managed his minutes accordingly.

Now Pulisic has the stage he craved in the Champions League and Lampard has another attacking weapon hungry to succeed as his first season in charge continues to take shape.

United States Football
Get the latest Cricket news, check out the India cricket schedule, Cricket live score . Like us on Facebook or follow us on Twitter for more sports updates. You can also download the NDTV Cricket app for Android or iOS.