Pedro headed in after 65 minutes following an intricate build-up from Chelsea, while Diego Costa scored in the 89th minute to help his side seal a place in the quarter-finals 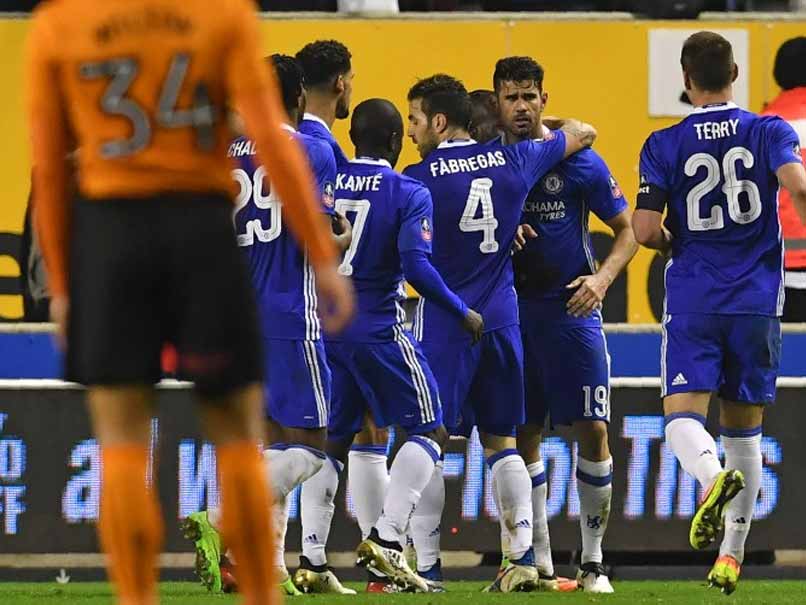 Chelsea saw off a gritty Wolverhampton side in the FA Cup fifth round.© AFP

Second-half goals from Pedro and Diego Costa earned Premier League leaders Chelsea a 2-0 win in a difficult FA Cup fifth-round tie at second-tier Wolverhampton Wanderers on Saturday. Pedro headed in after 65 minutes following an intricate build-up involving Costa, Cesc Fabregas and Willian. Costa sealed a place in the quarter-finals in the 89th minute after defender Matt Doherty inadvertently deflected a pass into his path. The prolific Chelsea striker had the time and space to easily stroke the ball into the Wolves goal, finally killing off the Championship side's brave resistance.

Having accounted for the Premier League scalps of Stoke City and Liverpool in previous rounds, Wolves looked in the mood to add the division's leaders to that list.

In front of Molineux's biggest crowd for 36 years, the home side made an electrifying start.

Asmir Begovic had already been required to tip a dangerous Conor Coady cross over his bar in the opening exchanges when former Chelsea youngster George Saville found the ball at his feet 15 yards out.

The unmarked midfielder unleashed a powerful left-foot shot that thundered against the left-hand post, with Andreas Weimann blasting a follow-up effort over.

That was the start of an absorbing cup tie, with the Championship side putting their league troubles behind them and going toe-to-toe with a Chelsea team who made seven changes from their least league game.

Chelsea manager Antonio Conte had still fielded a strong line-up, however, with former England international John Terry continuing his ever-present status in the FA Cup and Fabregas handed a start.

Fabregas looked capable of picking a hole in the home defence and did precisely that after 12 minutes when his lofted pass sent Willian sprinting into the area.

The Brazilian attempted to chip over Wolves goalkeeper Carl Ikeme, who did well to put a touch on the shot and steer it over his net.

The tie had plenty of aggression and a raucous atmosphere, especially when the home supporters claimed Weimann had been brought down by Willian in the area midway through the first half.

That appeal was turned down by referee Jonathan Moss, but Wolves maintained the pressure when Helder Costa turned neatly and unleashed a low shot that Begovic smothered well.

But Chelsea still posed a serious threat as Fabregas and Willian attempted to find the pass that would play in Costa over the Wolves back four.

A number of times the tactic came close to working and in first-half injury time a cross from the right by wing-back Victor Moses was met by Costa, back to goal, who hooked an effort wide.

Wolves opened the second half in similar, threatening fashion, with Pedro the first Chelsea player cautioned for a crude trip on the dangerous Helder Costa.

But it was Chelsea's Nathaniel Chalobah who was presented with the first shot of the half, a low strike from the edge of the area that went directly at the goalkeeper.

Chelsea's Costa also received yet another neat pass from Hazard and almost set up Chalobah for an attempt on goal, only to be denied by more committed Wolves defending.

Wolves' Costa eased the pressure momentarily with a high free-kick that Danny Batth headed into the arms of Begovic.

But soon after his namesake was played in by yet another Fabregas pass and left Batth on the floor before shooting into the side-netting.

The opening goal was not long in coming, although Dave Edwards looked like he might head in an equaliser minutes later, only to be denied by an important defensive header from Kurt Zouma.

In the closing stages, Fabregas should have doubled their advantage when he shot wide from Eden Hazard's pass, before Costa's strike -- his 16th of the season -- put the game to bed.

Comments
Topics mentioned in this article
Football Chelsea Wolverhampton Diego Costa
Get the latest updates on Fifa Worldcup 2022 and check out  Fifa World Cup Schedule, Stats and Live Cricket Score. Like us on Facebook or follow us on Twitter for more sports updates. You can also download the NDTV Cricket app for Android or iOS.