Spaniards Juan Mata and Cesar Azpilicueta scored as Jose Mourinho once again saw his side emerge triumphant after a 2-0 victory over his old sparring partner Arsene Wenger. 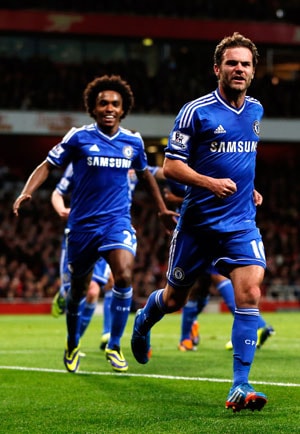 Chelsea knocked Premier League leaders Arsenal out of the League Cup in the fourth round on Tuesday, while Manchester United reached the quarter-finals at the expense of Norwich City.

The game at the Emirates Stadium was a repeat of the 2007 final, which Chelsea won 2-1, and Jose Mourinho once again saw his side emerge triumphant after a 2-0 victory over his old sparring partner Arsene Wenger.

Both sides made sweeping alterations to their starting line-ups, with Wenger making eight changes and Gary Cahill the only player to retain his place from Chelsea's 2-1 win over Manchester City on Sunday.

Nacho Monreal and Aaron Ramsey both went close for Arsenal, only for Juan Mata to make it 2-0 with a rasping right-foot strike in the 66th minute.

"The win is very important for our confidence," said Mata.

"After beating Manchester City and now Arsenal this week, we feel strong because they are very good teams."

Wenger was asked if the result would have a damaging impact on his team's confidence, but replied: "No. It's a different competition.

"It was a tight game and they took advantage of our mistakes."

United remain eight points below Arsenal in the league, but they booked a berth in the last eight after two goals from Javier Hernandez set up a breezy 4-0 win over Norwich at Old Trafford.

United manager David Moyes made nine changes, handing young England winger Wilfried Zaha a first start since the Community Shield, and saw his side take the lead in the 25th minute.

Leroy Fer was penalised for a foul on Adnan Januzaj and Hernandez sent Norwich goalkeeper Mark Bunn the wrong way from the penalty spot.

The Mexico striker claimed his second goal nine minutes into the second half, heading home at the second attempt after Bunn parried his initial effort from an Alexander Buttner cross.

Phil Jones and Fabio da Silva added a pair of late goals, following a lengthy stoppage due to a head injury sustained by Norwich forward Robert Snodgrass, who had to be carried off on a stretcher.

"Robert got a knock to his eye socket and he got concussion. He's been taken to hospital as a precaution," said Norwich coach Chris Hughton.

Fulham were the only top-flight casualties on the night, going down 4-3 in a gripping game at second-tier Leicester City.

Rodallega scored again and a scorching 87th-minute free-kick by Giorgos Karagounis looked to have sent the game to extra time, only for Lloyd Dyer to slide home an 89th-minute winner for Leicester.

Stoke City required penalties to overcome valiant 2011 winners Birmingham City, who twice came from behind to force a 4-4 draw despite the dismissal of midfielder Wade Elliott in first-half stoppage time.

Birmingham forward Peter Lovenkrands scored twice in the last five minutes to send the game to extra time before an Olly Lee goal in the 118th minute made it 4-4, only for Stoke to win 4-2 on penalties.

The draw for the quarter-finals will be made on Wednesday.