Chelsea F.C. Held to a Goalless Draw vs Dynamo Kiev in Champions League

Chelsea F.C. manager Jose Mourinho saw his side hit the woodwork through the recalled Eden Hazard and Willian, but had to settle for a point. 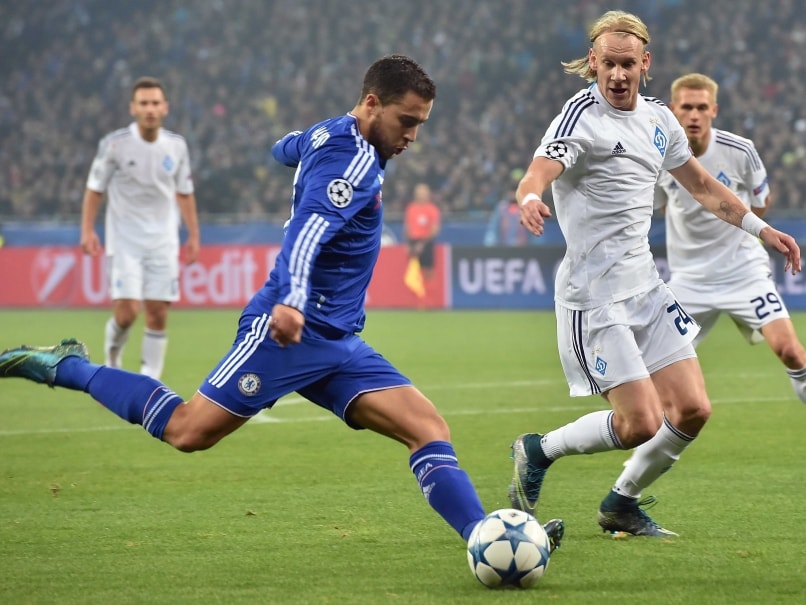 Eden Hazard made his presence felt on his return to Chelsea F.C. starting XI.© AFP
Kiev:

Chelsea's Champions League last 16 hopes remain in the balance after they drew 0-0 at Dynamo Kiev on Tuesday despite an improved display at the Olympic Stadium.

On a cold, misty night in the Ukrainian capital, Chelsea manager Jose Mourinho saw his side hit the woodwork through the recalled Eden Hazard and Willian, but had to settle for a point. (Click here for latest Football stories)

Mourinho also felt that his side should have been given a penalty after Cesc Fabregas went down in the Dynamo box during the first half.

Echoing a recent comment about a referee made by Arsenal manager Arsene Wenger, which Mourinho queried after being fined by the Football Association for remarks of his own, he told BT Sport: "The referee was weak and naive.

"Big penalty. I cannot understand what the goal referee does, because he doesn't make a clear decision, too. And when the result is 0-0 and such a penalty is not given, it is a crucial moment in the game."

Having previously lost 2-1 at Porto, it means the misfiring Premier League champions have gone two games without victory in Group G, leaving them three points below Porto and a point behind Dynamo.

But with home games against Dynamo and Porto to come, as well as a trip to Maccabi Tel Aviv, Mourinho remains confident his side will go through.

"We have the destiny in our hands," he said. "We play two matches at home and one in Israel, so the qualification depends clearly on us."

Serhiy Rebrov's Dynamo will also take heart from the game, however, particularly as it followed a 3-0 loss at home to Shakhtar Donetsk, which was their first league defeat in 39 games.

Mourinho made three changes to the team that beat Aston Villa 2-0 in the Premier League on Saturday, with Hazard, Gary Cahill and Nemanja Matic replacing Pedro Rodriguez, Ruben Loftus-Cheek and Baba Rahman.

Hazard, last season's Player of the Season, had been upbraided by Mourinho for his lack of defensive efforts, but he was quick to make his presence felt on his return to the starting XI.

In the ninth minute, a deflected shot from Fabregas found its way to the Belgian, who shifted the ball onto his right foot and curled a shot goalwards, only for Dynamo's 40-year-old-goalkeeper Olexandr Shovkovskiy to brilliantly tip it onto the post.

It was then that the penalty incident that irked Mourinho occurred, with Slovenian referee Damir Skomina waving play on when Fabregas tumbled after being sandwiched between Serhiy Rybalka and Yevhen Khacheridi.

Chelsea were showing a zip and snap scarcely seen this season, but Vitaliy Buyalskiy served a reminder of the hosts' threat mid-way through the first half with a left-foot shot that flicked off John Terry and flashed narrowly wide.

The visitors continued to exert pressure early in the second period, with Willian bending a 25-yard free-kick against the bar and Fabregas driving a shot straight at Shovkovskiy.

But with each chance they did not take, so the risk of a sucker-punch loomed larger, and Dynamo began to make inroads of their own.

With Chelsea's players caught upfield, Andriy Yarmolenko released Derlis Gonzalez with a showy, no-look pass and the Paraguayan cut inside before forcing Asmir Begovic to save at his near post.

Mourinho sent Oscar on in place of Fabregas for the final 15 minutes, but Dynamo continued to threaten.

After a sloppy pass from visiting captain Terry, Denys Garmash set up fellow substitute Junior Moraes with a whipped cross from the right, but Begovic bravely threw himself at the Brazilian's feet.

Willian almost had the last word for the men in blue, but he could only curl wide from just outside the box.

Comments
Topics mentioned in this article
Eden Hazard Willian Chelsea Dynamo Kiev Football
Get the latest updates on IND vs NZ 2021, check out the Schedule and Live Score . Like us on Facebook or follow us on Twitter for more sports updates. You can also download the NDTV Cricket app for Android or iOS.