Diego Costa was sent off in Chelsea's FA Cup clash against Everton as the team exited the tournament, just days after being dumped out of the Champions League by Paris Saint-Germain.

Written by Associated Press
Read Time : 4-min
Diego Costa was once again in the news after he was sent off during Chelsea's FA Cup clash against Everton for allegedly biting Gareth Barry. © AP

Diego Costa told Chelsea he didn't bite an Everton opponent in a confrontation that led to the fiery striker being sent off on Saturday as his team was knocked out of the FA Cup. (Latest Football News)

Chelsea had just been humiliated by former striker Romelu Lukaku scoring twice in a five-minute span, including a breathtaking solo goal, when Costa was sent off in the 84th minute of Everton's 2-0 win in the FA Cup quarterfinals. (Manchester City's Title Hopes Dented by Draw Against Norwich City)

Reacting to a challenge from Gareth Barry, Costa thrust his head at the Everton midfielder before appearing to sink his teeth toward Barry's neck in a biting motion. Having already been shown a yellow card for a 10th-minute foul on Barry, Costa was dismissed for the first time in two seasons at Chelsea after being booked again.

There was no immediate reaction from Barry to suggest he had been bitten. More than four hours after the incident, Chelsea insisted there was no bite.

The club tweeted from their official handle @ChelseaFC

A club spokesman said: 'Diego spoke to club officials after the game and expressed regret over his reaction to the challenge from... (1/2)

...Gareth Barry that led to his red card, but Diego was also very clear that he did not bite him at any point during that altercation.'(2/2)

"Diego Costa had a fighting spirit and I would like to praise the referee (Michael Oliver)," Everton manager Roberto Martinez said. "The sending off of Costa was right.

"The sending off of Gareth Barry was right and the referee never allowed those emotions to stop the fluency. Whatever happens with Diego Costa I am sure the two players shook it off."

The FA Cup exit followed Chelsea being eliminated from the Champions League by Paris Saint-Germain on Wednesday.

Any hopes of defending the Premier League trophy were extinguished long ago, with Chelsea currently 10th with nine games remaining and highly likely to miss out on European football next season. 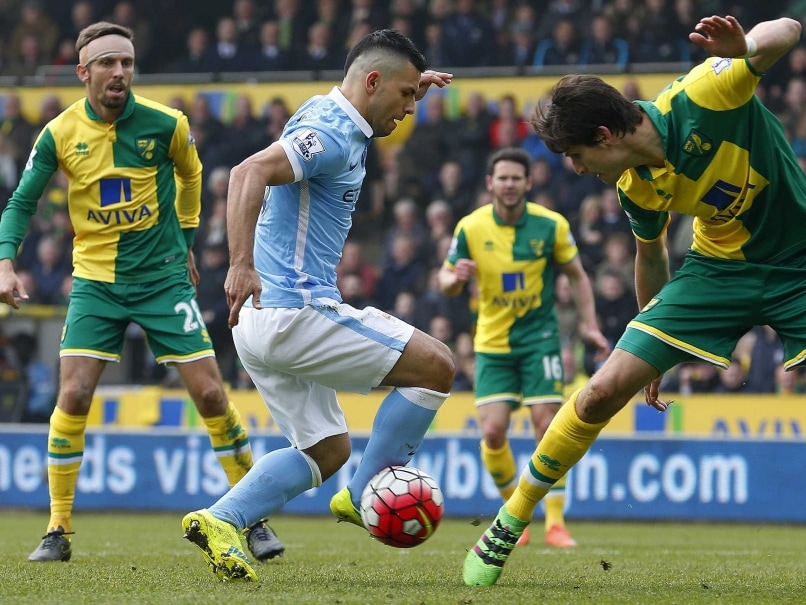 Manchester City fell nine points behind Leicester City after they were held to a 0-0 draw by Norwich.

Manchester City doesn't look like it will be succeeding Chelsea as Premier League champions after being held 0-0 at relegation-threatened Norwich on Saturday to stay fourth, nine points behind surprise leader Leicester.

The late dismissals at Goodison Park overshadowed Lukaku's superb goals which left Chelsea to rue offloading the Belgium striker in 2014 for 28 million pounds, having spent most of his career on loan away from Stamford Bridge.

Lukaku's first goal came in the 77th minute after Ross Barkley slipped the ball through to him on the left wing. Lukaku slalomed past two players before cutting inside past defenders Cesar Azpilicueta and Branislav Ivanovic and striking low past compatriot Thibaut Courtois.

The Belgium goalkeeper was beaten again in the 82nd when Lukaku put the ball through his legs for his 25th goal of the season - a tally greater than Chelsea's strikers combined.

So, unlike in 2009, Guus Hiddink will not be ending this interim spell as Chelsea manager by lifting the FA Cup.

And Jose Mourinho's permanent successor will have to rebuild the squad by attracting players to a team likely out of Europe. At the same time, Chelsea is still dealing with the legal fallout from Mourinho's rift with its former team doctor on the opening day of the season as Eva Carneiro's constructive dismissal case heads to a public tribunal hearing.

Relegation was the immediate threat to Chelsea when Hiddink replaced Mourinho in December but the champions' Premier League status is not under threat.

"My first task was to get us, as soon as possible, out of this relegation zone which we surprisingly did well within a few weeks from the 16th place to 10th," Hiddink said. "But then it is difficult, as I said before, to achieve the Champions League places and maintain two roads to have success which is the FA Cup and which was the Champions League. They are gone now and that's a pity."

Bournemouth looks like staying for a second season in the top flight after beating Swansea 3-2 to move 13 points clear of the relegation zone with eight games to play.

Steve Cook grabbed the winner after Max Gradel netted his first goal for the south-coast club and Joshua King only his second.

Swansea had leveled twice, first through Modou Barrow and then Gylfi Sigurdsson. But the Welsh club is now only two places and eight points above the drop zone.

Norwich remains in the relegation zone despite drawing with Manchester City, but above Newcastle and Aston Villa.

In Saturday's third Premier League game, Graziano Pelle scored twice as Southampton beat Stoke 2-1, leapfrogging the hosts in the standings to seventh place. Southampton had Sadio Mane sent off in second-half stoppage time for an elbow on Erik Pieters.

Comments
Topics mentioned in this article Manchester City Norwich City Chelsea Diego Costa Football
Get the latest Indian Premier League 2020 news, check out the IPL 2020 schedule, Cricket live score . Like us on Facebook or follow us on Twitter for more IPL 2020 updates. You can also download the NDTV Cricket app for Android or iOS.
Related Articles