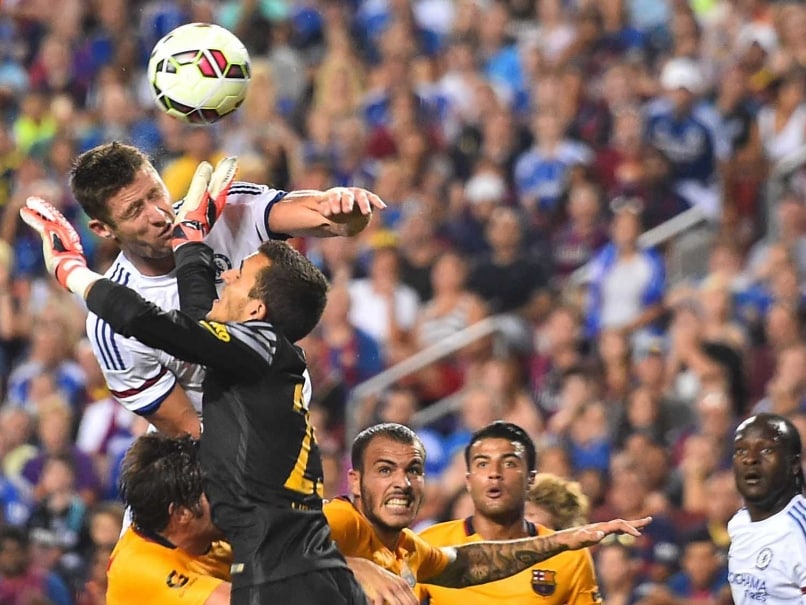 Chelsea's Gary Cahill was among the among the scorers.© AFP
Washington:

The teams were deadlocked 2-2 after full time. Chelsea's Eden Hazard opened the scoring in the 10th minute. Luis Suarez and Sandro Ramirez netted second-half goals to put Barcelona ahead only to have Gary Cahill pull the Blues level with a header in the 85th minute. (Chelsea Legend Didier Drogba Joins Montreal Impact in Major League Soccer Transfer)

In the shootout, Alan Halilovic put Barcelona behind when he slammed a shot off the crossbar to open the second round. In the third, Courtois denied Gerard Pique and Chelsea's Ramires and Loic Perry scored to secure the triumph.

Both squads are in the training stages of defending their crowns and sought to evaluate talent and test combinations against elite competition to conclude their US tours.

Chelsea manager Jose Mourinho, who sent Brazilian defender Filipe Luis to Atletico Madrid hours before the match, wanted a top-notch US farewell before the Blues flew back to London early Wednesday morning and neither side disappointed before 78,914 at the home of the NFL Washington Redskins. (Barcelona to Appeal Fine for King's Cup Final Booing)

Hazard made a sizzling start. The 24-year-old Belgian midfielder raced past three defenders into the left corner of the box and tucked a shot just side the near post past helpless Barca goalkeeper Marc Andre Ter Stegen.

The Blues missed more chances as Oscar sent a free kick off the woodwork and Diego Costa missed a great chance in the 32nd minute, sending a shot wide of the far post with only desperate Ter Stegan to deny him.

Courtois was tested twice in short order, stopping Suarez and Barca captain Sergio Busquets from long range in the 31st and 32nd minutes.

Suarez escaped defender Kurt Zouma for another chance in the 34th but Courtois went low to his right to keep the sheet blank. A Suarez cross gave Ivan Rakitic a 10-meter shot but the Croatian popped his shot well over the crossbar.

But in the 52nd minute, Suarez found the equalizer on a beautiful play. He lured out Courtois then chipped the ball over him and across the goal line, crossing just before Zouma's desperate clearing attempt.

Ramirez followed in the 66th to put Barcelona ahead, curling a left-footed shot into the far side of the net past Courtois for a 2-1 edge.

But Chelsea answered only five minutes before full time when Willian's free kick was headed high into the air and substitute Barcelona goalkeeper Jordi Masip came off his line to try and make the grab. Instead, Cahill nodded the ball into the vacant net even after taking a punch to the head that caused him to be removed from the match.

Barcelona, coming off an unprecedented second European treble of La Liga and the Copa del Rey plus the Champions League, was without five players, including standouts Lionel Messi and Neymar, who took part in Copa America last month.

Barcelona earlier beat the Los Angeles Galaxy 2-1 and lost 3-1 to Manchester United while Chelsea lost 4-3 to New York Red Bulls and beat Paris Saint-Germain 6-5 on penalties after a 1-1 draw.

Comments
Topics mentioned in this article
Gary Cahill Luis Suarez Chelsea Barcelona Football
Get the latest updates on ICC T20 Worldcup 2022 and CWG 2022 check out the Schedule, Live Score and Medals Tally. Like us on Facebook or follow us on Twitter for more sports updates. You can also download the NDTV Cricket app for Android or iOS.