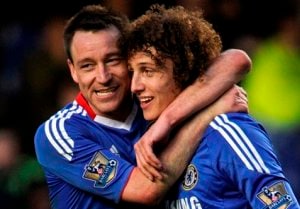 Brazil internationals David Luiz and Ramires scored late goals as Chelsea beat Manchester City 2-0 on Sunday to climb above its Premier League rival into third place, boosting the reigning champions' hopes of a late push for the title.

Center back Luiz met a free kick by substitute Didier Drogba with a firm downward header into the corner in the 78th minute, before midfielder Ramires danced through the City defense to secure victory in injury time at Stamford Bridge.

Chelsea moved nine points behind league leader Manchester United with a game in hand and is now just four adrift of second-place Arsenal after recovering from its midseason slump. The Blues have lost just one of their last eight league matches.

"We have nine games to play and we have to do our best. Our form is good," said Chelsea manager Carlo Ancelotti said. "But in my opinion, it has come too late. Manchester United won yesterday (1-0 against Bolton) so the gap is the same. We have to focus game by game, nothing more."

The hosts were the better team in a dull encounter, with City - which now looks to be out of title contention - playing defensively and barely threatening home goalkeeper Petr Cech. City badly missed top scorer Carlos Tevez, who was absent after failing a late fitness test on a groin strain.

"Until 70 minutes, it was normal that Chelsea had more possession but we conceded nothing to them," said City manager Roberto Mancini, who looked to have set his stall out for a 0-0 draw. "After the goal, everything changed."

Fernando Torres, chosen ahead of Drogba once again, failed to break his goal drought for the champions that will now stretch to more than two months, with Chelsea not in action again until the start of April.

Indeed Luiz, who was bought on transfer deadline day like Torres, has looked more assured in front of goal than the Spain striker. The 21-million-pounds ($34 million) signing also scored in the Blues' 2-1 win over league leader Manchester United on March 1 and has steadied Chelsea's defense, too, since arriving in London.

"As you can see, he's been fantastic for us since he came here," Chelsea midfielder Michael Essien said. "We need his type of player at Chelsea. He's done a great job for us."

Chelsea's John Terry - the newly appointed England captain playing in front of his national-team manager Fabio Capello - and City's Vincent Kompany were exemplary at center back as defenses dominated in a well-contested match.

Aside from a fierce low drive from Yaya Toure in the sixth minute that Cech tipped wide, City offered precious little going forward with lone striker Edin Dzeko, who replaced Tevez and was prefered to Mario Balotelli up front, often crowded out. David Silva is often City's creative fulcrum but a physical game such as this was never going to suit the slight Spain playmaker.

Most of the action happened at the other end, although City goalkeeper Joe Hart was only tested once in the first half, holding safely a shot on the turn by Salomon Kalou in the 42nd minute.

Torres, hardly given a sniff by the outstanding Kompany, wriggled free once but his attempted shot was blocked by a last-ditch tackle from Nigel de Jong in the 34th.

Torres, Kalou and Florent Malouda combined well for the latter to dribble an effort straight at Hart at the start of the second half, which began in the same vein as the first.

Branislav Ivanovic's goalbound header from Frank Lampard's cross hit the back of Kompany in the 62nd as Chelsea continued to press and the hosts got their reward in the 78th.

Drogba, who had come on for the ineffective Torres eight minutes earlier, curled in a free kick from the left that Luiz headed beyond the dive of Hart and into the corner.

There was still time for Ramires to dribble through a couple of weak challenges to plant an unerring finish into the corner with seconds remaining.

Comments
Topics mentioned in this article
Football Inter Milan Manchester City Chelsea Steven Gerrard Birmingham City Everton Liverpool Arsenal
Get the latest updates on ICC T20 Worldcup 2022 and CWG 2022 check out the Schedule, Live Score and Medals Tally. Like us on Facebook or follow us on Twitter for more sports updates. You can also download the NDTV Cricket app for Android or iOS.