Chelsea claimed partial revenge for their stormy loss to Manchester United at the weekend by prevailing 5-4 when the teams resumed hostilities in an end-to-end fourth-round League Cup tie on Wednesday. 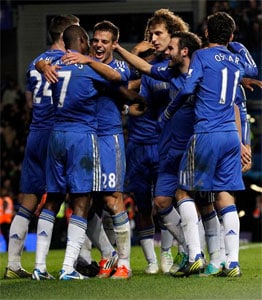 Chelsea claimed partial revenge for their stormy loss to Manchester United at the weekend by prevailing 5-4 when the teams resumed hostilities in an end-to-end fourth-round League Cup tie on Wednesday.

United led three times at Stamford Bridge, but each time Chelsea responded, with Eden Hazard's 94th-minute penalty taking the game to extra time before goals from Daniel Sturridge and Ramires put the hosts in the quarter-finals.

"It was a very exciting game -- a typical cup game," said Chelsea coach Roberto Di Matteo, whose side face Leeds United in the last eight.

"We could have finished off the game earlier, but we showed what fantastic character we have to come back from behind three times."

There were shocks in the night's other ties, meanwhile, as Swansea City won 3-1 at Liverpool to knock former coach Brendan Rodgers out of the competition and Norwich City came from behind to eliminate Tottenham Hotspur.

United's controversial 3-2 win in the Premier League on Sunday ended with claims that referee Mark Clattenburg had abused Chelsea's John Mikel Obi, but Wednesday's game was a gripping contest more in line with Arsenal's astonishing 7-5 win at Reading the night before.

United made 10 changes to the side that won on Sunday, but they went ahead in the 22nd minute when Anderson robbed the dallying Oriol Romeu on the edge of the box and Ryan Giggs coolly shaped a shot past Petr Cech.

The lead last only 11 minutes, David Luiz equalising from the penalty spot, but more defensive sloppiness from the home side allowed the visitors to restore their lead just before half-time.

Luiz lost the ball after one of his trademark romps up the pitch and when Anderson fed Javier Hernandez, the Mexican held his nerve to beat Cech and claim his sixth goal in nine games against Chelsea.

Gary Cahill replied with a 52nd-minute header, but United soon moved ahead again, as Nani exchanged passes with Anderson, skipped past Luiz and then delicately lofted the ball over Cech.

Chelsea were aggrieved that referee Lee Mason declined to award a penalty after an apparent handball by Michael Keane, but redemption arrived with the last kick of normal time.

Keane's centre-back partner, Scott Wootton, was penalised for blundering into the back of Ramires, and Hazard belied the pressure of the situation to roll a cocksure penalty down the centre of the goal.

Wootton, 21, was also at fault for Chelsea's fourth goal, miscuing an attempted back header and then watching on in horror as Sturridge rounded Anders Lindegaard before tucking the ball home.

Ramires made the game safe four minutes from the end, collecting Hazard's pass, rounding Lindegaard, and slipping the ball into the net, before Giggs scored from the spot to take the incredible goal tally to nine.

"If you're winning 3-2 in the final seconds, you really should see it out," said United coach Alex Ferguson. "We only have ourselves to blame."

Liverpool's season encountered fresh disappointment at Anfield as they were outplayed by Swansea, who reached the last eight for the first time.

Chico, Nathan Dyer and Jonathan de Guzman found the net for the Swans, with Luis Suarez on target for Rodgers' side.

Meanwhile, a quick-fire pair of goals in the last six minutes saw Norwich come from behind to win 2-1 against Tottenham at Carrow Road.

Gareth Bale fired home from outside the box to give Spurs the lead in the 66th minute but Jan Vertonghen's 84th-minute own goal levelled the scores.

Comments
Topics mentioned in this article
Football Arsenal Chelsea Wayne Rooney Alex Ferguson Manchester United
Get the latest Cricket news, check out the India cricket schedule, Cricket live score . Like us on Facebook or follow us on Twitter for more sports updates. You can also download the NDTV Cricket app for Android or iOS.