Jadon Sancho has appeared as a substitute in each of Dortmund's six Bundesliga outings this season. 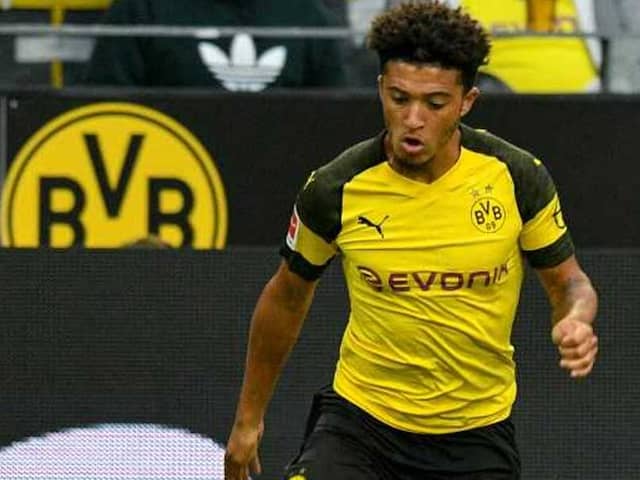 Jadon Sancho signed a two-year extension to his contract, until 2022, with Borussia Dortmund.© AFP

Jadon Sancho hopes his reputation for being a "weapon" off the bench for Borussia Dortmund will win the England Under-19 international a starting berth against Monaco in the Champions League on Wednesday. The 18-year-old wants a place in Lucien Favre's line-up after once more proving his worth on Saturday, when he helped seal a 4-2 comeback Bundesliga win at Bayer Leverkusen with two devastating assists. He set up Marco Reus for the equaliser at the BayArena a minute after coming on, then sent Paco Alcacer away on a counter-attack for the second of the Spaniard's two late goals as Dortmund went top of the table.

He has appeared as a substitute in each of Dortmund's six Bundesliga outings this season, but he did start in their opening Champions League game, when they won 1-0 at Club Brugge to get off to the perfect start in Group A.

Sancho now craves a regular starting berth after providing six assists as well as one goal in the Bundesliga, although he admits he is at his best running at tiring defences as a substitute.

"I just had a bit more energy," the junior England international, who joined last year from Manchester City, told Bundesliga.com of his stunning display at Leverkusen.

"The rest were a bit tired and I came on to help. The coach keeps rotating so that's how strong this team is.

"Obviously, I don't want to be a sub, but if I keep on working hard, hopefully I can get in the starting team."

Having seen what the English teenager can do, Dortmund announced on Tuesday that Sancho has signed a two-year extension to his contract, until 2022.

His tally of six Bundesliga assists makes him the top goal provider in all of Europe's top five leagues so far this season.

Sancho was still just 17 when he opted to try his luck in the Bundesliga after being omitted from City's pre-season tour in July 2017, and Pep Guardiola's loss has been Dortmund's gain.

"I'm very glad that I decided to move to Dortmund, because everything turned out to be true: this city lives football like no other, and young players here are given game time," said Sancho.

His potential is huge.

"He could be our Neymar-type player -- in terms of being unpredictable," Micciche told The Guardian last month.

"He's flamboyant, entertaining to watch, but like Neymar he's effective with it."

Sancho is getting game time in a bumper Dortmund squad where even Mario Goetze, whose goal won the 2014 World Cup final for Germany, is struggling to be picked.

Favre is carefully easing the slightly-built Sancho into the physically demanding Bundesliga, where he has yet to play more than 32 minutes of any one league game this season.

Likewise, Dortmund are shielding him off the pitch and rarely grant reporters interviews with the English teenager.

He created a goal for Germany midfielder Julian Weigl and scored one himself in just 16 minutes off the bench in the 7-0 thumping of Nuremberg last Wednesday.

Sancho also set captain Marco Reus up for his late goal in the 4-1 win over RB Leipzig in Dortmund's opening game of the season, and the young winger said he is learning plenty from the Germany star.

"We just have that special connection," said Sancho.

"He reads me, I read him, and he teaches me a lot of things, like to be mature on the ball.

"At first I wasn't mature but he told me to be calm and just play my game, and that helped me a lot.

"Obviously, he's a great player and I'm so happy I'm playing with him."

The feeling is mutual.

"When our opponents ease off a little and Jadon comes into the game, he's a weapon for us every single time," Reus said after the thrashing of Nuremberg.

"We're happy to have him up our sleeve and he always gives us a boost."