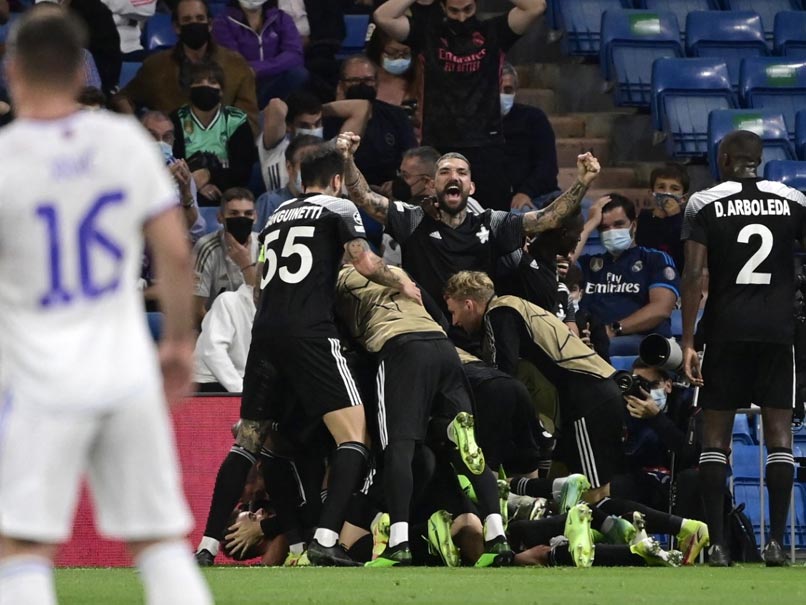 Lionel Messi opened his Paris Saint-Germain account as the French side beat Manchester City while new boys Sheriff Tiraspol shocked Real Madrid in the Champions League on Tuesday. Messi's top-corner finish added to Idrissa Gueye's first half goal as PSG moved top of Group A with the 2-0 win over last year's runners up. Pep Guardiola's side hit the bar twice in the first half with Portugal playmaker Bernardo Silva failing to score two metres out with PSG goalkeeper Gianluigi Donnarumma helplessly on the ground.

"The important thing was to win, against an immense opponent, one of the contenders for the trophy," Messi told broadcaster Canal+.

"I had only played here (Parc des Princes) once, but little by little I'm adapting and integrating to the team," he added.

In Group D, Sheriff, playing in just their second ever game in the group stage of the competition, upset record 13-time winners Real Madrid 2-1 in the Spanish capital.

Uzbekistan winger Jasur Jakhshibaev put the Moldovans in the lead before the half hour mark as Karim Benzema equalised after 65 minutes to score for a 17th different season in the competition, a feat only also achieved by 34-year-old Messi.

But the hero for Sheriff, who are based in the region of Transnistria on the Moldovan-Ukrainian border, was Luxembourg attacking midfielder Sebastien Thill.

The 27-year-old Thill fired home a sublime half volley with 62 seconds of regular time remaining at the Santiago Bernabeu two week after Sheriff had beaten Shakhtar Donetsk earlier in the month in their opening group game.

"After this match we all went crazy. There are a lot foreigners in the club, we come from all types of countries. It's our strength," Thill told Canal+.

"It's football, we had 20 shots or more and we scored one, they had two shots scored both," he told Movistar+.

"We have to pay more attention, especially defensively.

"We started well, we had total control of the game, we had opportunities to get ahead, but they scored a great goal at the end," he added.

Earlier in the group, Serie A champions Inter Milan remain winless in Europe this season following the 0-0 draw at Shakhtar.

Ukrainian Oleksandr Usyk was a spectator in Kiev days after beating Anthony Joshua on points to become just the third boxer to win both the cruiserweight and heavyweight world titles.

Milan played an hour with 10-man after Franck Kessie's red card and the seven-time European champions were unable to claim a first win in the competition since 2013.

Earlier, Ivory Coast striker Sebastien Haller took his tally to 10 goals in as many games this season as Ajax beat Besiktas 2-0 to stay top of Group C in the Champions League on Tuesday.

American Jesse Marsch lost his fifth game in nine matches in charge of RB Leipzig in the 2-1 home defeat to Club Brugge. Leipzig face a tough ask to reach the last 16 in a group alongside PSG and City.

On Wednesday, champions Chelsea head to Juventus, Manchester United host Villarreal and Benfica welcome Barcelona in the pick of the ties.