Manchester United are languishing at the ninth spot in the EPL points table after back-to-back losses to Everton and Newcastle United but have been unbeaten in the Champions League so far. A win against Shakhtar will help them qualify as the top team from their group. 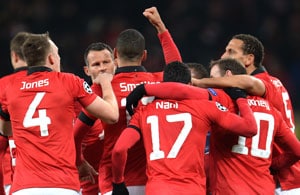 Manchester United will once again look to the Champions League for distraction from their domestic woes when they host Shakhtar Donetsk in their concluding group-phase game on Tuesday.

Consecutive home defeats by Everton and Newcastle United have left the defending champions 13 points behind leaders Arsenal in the Premier League and they are seven points below the Champions League places.

Manager David Moyes has had to face a barrage of questions about his ability to turn the situation around, but in European competition he has found solace.

United are unbeaten in the Champions League this season and secured a place in the knockout rounds with a superb 5-0 victory away to Bayer Leverkusen in their last outing.

They can secure top spot in Group A, and with it an advantageous draw for the last 16, if they avoid defeat against Shakhtar, and Moyes has called on his players to finish the job. (RVP going nowhere: Moyes)

"It's important we give ourselves every chance of progressing even further in the Champions League by finishing top," he said.

"It won't make it easier, but it will give us a little bit of an advantage by having the second game at home (in the last 16).

"We will do everything we can to be top and, as well as that, we're unbeaten in the group and want to stay unbeaten if we can make that happen."

Moyes made seven changes for Saturday's l-0 loss to Newcastle -- some enforced -- and with a place in the round of 16 already secure, he suggested that he could shuffle his pack again. (Read: Kenyan fan commits suicide after Manchester United's loss to Newcastle)

Asked if he might rotate his squad for the visit of the Ukrainian champions, he replied: "We have qualified, so it gives me a chance to have a look at that."

Moyes will have Wayne Rooney available again after he missed the loss to Newcastle through suspension, while Marouane Fellaini is in contention after he was suspended for the trip to Leverkusen.

"It is important to get through with a game to spare but we realise there is still a job to do," said United defender Chris Smalling.

"We want to finish in that top spot, so we will still be focused going into the match against Shakhtar."

Shakhtar approach the game in second place in the group, three points behind United and a point above third-place Leverkusen.

Mircea Lucescu's side need to match Leverkusen's result, away to eliminated Real Sociedad, to go through and can qualify as group winners if they win at Old Trafford.

Teams are separated by head-to-head record if they finish level on points and Lucescu's side drew 1-1 with United in October's reverse fixture.

Shakhtar have had a week to prepare for the game, having played their final match prior to the Ukrainian Premier League's winter break -- a 1-0 win at Chornomorets Odesa in -- on December 3.

Shakhtar have never won in England, but they beat Chelsea in Donetsk in last season's competition and only lost the return game after Victor Moses scored a 94th-minute winner.

United, meanwhile, are seeking to register three group-phase wins for the first time since they last won the competition in 2007-08, and Moyes says he cannot explain why their form has been so much better than in the league.

"I couldn't put my finger on why those games have looked any better than any of the others. We've played well in several of the games, which has been good.

"A lot was said about me coming into it (the Champions League), but I've got to say I've enjoyed the games, going away from home and being involved in the matches.

"It's the biggest tournament we play in. We've done OK so far and we want to try to play well again in the last game."

Comments
Topics mentioned in this article
Football Liverpool Shakhtar Donetsk Marouane Fellaini
Get the latest updates on India vs Australia Series, check out the India vs Australia Schedule for 2020-21 and Ind vs Aus live score . Like us on Facebook or follow us on Twitter for more sports updates. You can also download the NDTV Cricket app for Android or iOS.