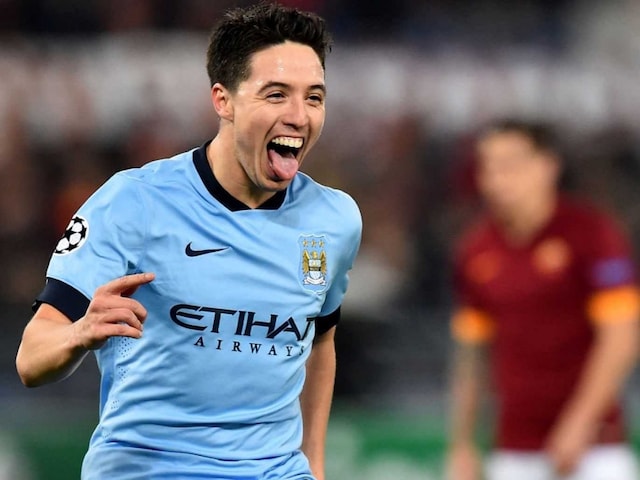 A Samir Nasri bullet and a late goal by Pablo Zabaleta saw Manchester City into the last 16 of the Champions League after a stunning 2-0 win over Roma at a packed Stadio Olimpico on Wednesday. (Also read: Chelsea knock out Sporting Lisbon | Barca outclass PSG)

City, requiring at least a score-draw to go through to the knock-out phase, were dominated for large periods of the match but Nasri turned the game around on the hour when he fired an unstoppable shot past Morgan De Sanctis from 25 metres.

The goal left Roma requiring two goals to qualify for the knock-out phase, but after the Serie A side spurned a series of late chances, City rubbed salt into their wounds in the 86th minute when Zabaleta swept Nasri's low delivery past De Sanctis for his first Champions League goal.

Needing just a win to go through, Roma made their victory intentions clear from the start, with Gervinho, Jose Holebas and then Radja Nainggolan all being given space deep on the left to create half-chances that tested City's resolve in the opening minutes.

It was a sluggish start for City, and the English champions went on to create only a few half-chances as the half wore on.

An Edin Dzeko header from a cross on the left was high and wide but on 16 minutes a probing run by Nasri allowed Jesus Navas to fire a delivery from the right that went begging.

Roma countered and Nainggolan sent Adem Ljajic through but the Serbian's drive from distance was off target.

City's best chance of the half fell to James Milner after 20 minutes but De Sanctis was down low quickly to block the midfielder's shot from the left.

Again, Roma went on the counter but after a 40-metre run Gervinho's low, angled drive was tipped to safety by Joe Hart at his far post.

An alert Hart then easily collected a powerful poke by Maicon after the Brazilian had muscled his way through the City midfield.

Moments later, a defence-splitting pass from Navas sent Milner through only for De Sanctis to come out quickly to close down the angle.

Roma had claims for a penalty waved away on the stroke of half-time when Gervinho tumbled under pressure in the box after a well-worked move with Francesco Totti, Miralem Pjanic and Ljajic.

City looked a lot brighter after the restart with Roma pegged in for the opening 10 minutes until some slick play by Gervinho down the right had the Giallorossi fans out of their seats.

Pjanic then forced Hart into a two-handed block with an effort from 20 metres out, but minutes later City were in front.

Nasri took possession over 25 metres out and as Seydou Keita backed off, the Frenchman fired an angled drive past De Sanctis and into the net in off the near post.

Minutes later Nainggolan unleashed a piercing shot while caught in among City bodies but Hart blocked with a two-handed save.

A great build-up by Roma on 67 mnutes saw Ljajic turn Zabaleta inside out on the left but the Serbian somehow fired over the crossbar with the goal at his mercy.

Twice in succession Roma spurned the chance to level, Kostas Manolas's header powering off a beaten Hart's post from a corner and then Mattia Destro's effort from Pjanic's corner being blocked at the back post moments later.

Those misses proved costly, and as the final whistle approached concentration levels lapsed.

Nasri held the ball up well and after a feint in front of Holebas sent Zabaleta through to beat De Sanctis from close range.

Comments
Topics mentioned in this article
Manchester City Roma Samir Nasri Pablo Zabaleta Football
Get the latest Cricket news, check out the India cricket schedule, Cricket live score . Like us on Facebook or follow us on Twitter for more sports updates. You can also download the NDTV Cricket app for Android or iOS.