Champions League: Manchester City won 2-0 at Borussia Moenchengladbach to close in on the quarter-finals. 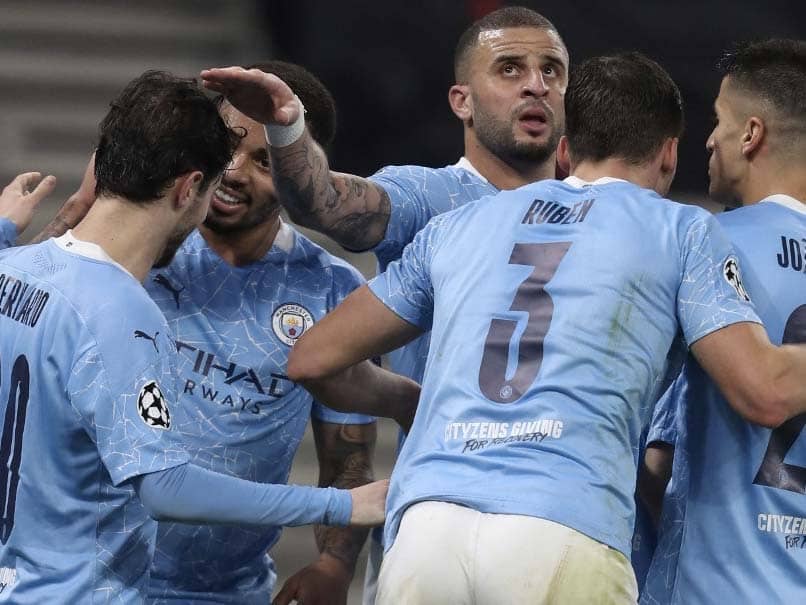 Bernardo Silva and Gabriel Jesus found the back of the net for Manchester City.© AFP

Manchester City moved to the verge of the Champions League quarter-finals with a 2-0 win over Borussia Moenchengladbach on Wednesday but coach Pep Guardiola insisted his team still need to "be more clinical up front". A first half header from Bernardo Silva and a Gabriel Jesus strike in the second period of the last 16 first leg tie extended a winning streak by Guardiola's high-flying side to 19 games in all competitions. Premier League leaders City camped inside the Gladbach half for most of the game, which was moved to Hungary due to Germany's Covid-19 travel restrictions.

Although dominant, City took time to break down a stubborn German defence, often foiled by the interceptions of Algeria left-back Ramy Bensebaini.

While Guardiola said afterwards he was "pleased" with the result, he added City "have to improve" to challenge for Champions League honours.

"We controlled the game. Unfortunately we were not clinical up front, it is something we have to improve in this competition, we were not good enough in the box, we didn't dribble and shoot enough," said Guardiola.

"In this competition you have to be perfect to be sure you can go through," he said.

Debutants in the Champions League knockout stages, Gladbach had been urged by coach Marco Rose to be brave against Guardiola's side.

France's Alassane Plea was almost through on goal on 20 minutes after a rare counterattack, but a nervy and deep-lying Gladbach eventually succumbed to mounting pressure in the 29th minute.

A sublime inch-perfect cross by Portuguese defender Joao Cancelo curled over the defence from the left to reach his compatriot Silva who flicked his close-range header past Yann Sommer.

"We tried to play simple and not make mistakes. It's a good win for us, but it's not over yet," Silva told BT Sport.

"Every time when he plays (Silva) is an exceptional player, he's really good in the air, the goal was fantastic how he finished it," said Guardiola.

The 26-year-old Cancelo, impressive throughout, nearly doubled the lead five minutes from the break but his shot from just outside the box pinged over the bar.

Then early in the second half Jesus should have converted after latching on to a poorly judged backpass by Bensebaini but saw his shot blocked by Swiss defender Nico Elvedi.

Apart from a lunging backheel from Plea that flashed just wide of Ederson's far post on the hour mark, City comfortably contained the Germans, and went two up in the 65th minute.

Another majestic cross-field pass by Cancelo again found Silva at Sommer's far post who this time headed back across the goalmouth for Jesus to fire home and seal City's 19th successive victory and sixth Champions League clean sheet in a row.

Gladbach, who managed just one shot on target throughout the game, an effort by substitute Hannes Wolf saved by Ederson in the last moments, now face a formidable task to turn around the tie in the return leg scheduled for March 16 in Manchester.

"We deservedly lost today against a very strong team, you don't get many chances against such an opponent, we simply couldn't attack more," said Rose

"It would have been good to score at the end to be in a better position."