Liverpool eased past RB Leipzig into the Champions League quarter-finals with a 2-0 win in Budapest Wednesday that coach Jurgen Klopp said helps his side put their Premier League problems to one side. 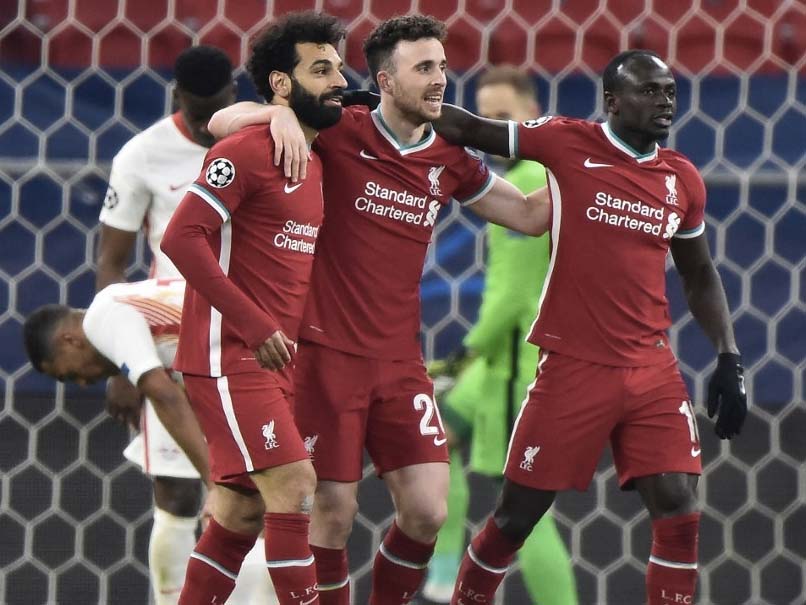 Liverpool eased past RB Leipzig into the Champions Leaguequarter-finals with a 2-0 win in Budapest Wednesday that coach Jurgen Klopp said helps his side put their Premier League problems to one side. Repeating their rapid-fire double act from the first leg, Mohamed Salah and Sadio Mane again struck within four second-half minutes to give the Reds a 4-0 aggregate win and keep alive Liverpool's hopes of rescuing their miserable domestic season with European glory.

After six successive defeats at Anfield and dropping to eighth place in the Premier League, Klopp's men looked relieved to be away from home, with the second leg also played in the Hungarian capital due to Covid-19 travel restrictions.

"They were outstanding. We had to switch off the Premier League stuff to get here and to try. To give it a proper try," Klopp told BT Sport.

"The boys really enjoyed themselves tonight which is important," said Klopp.

"It is a big result for us," said Salah.

"We lost a few games in the Premier League, the team is not in the best shape but we want to fight in the Champions League," he said.

"It's been tough in the Premier League, everybody can see that. The last couple of years we were winning, we were flying. This year we had a couple of injuries so we were unlucky, we are trying to fix that but it is hard," he added.

While the Reds showed attacking intent from the off, they squandered a string of chances throughout the first half.

"First-half we created massive chances and didn't score which is a thing we have in 2021," said Klopp.

Unmarked at a corner, Diogo Jota should have opened their account in the 18th minute but the Portuguese striker headed straight at Hungarian goalkeeper Peter Gulacsi who tipped over.

Midway through the period, an acrobatic scissor kick by Thiago Alcantara released Salah on the left but his left-footed effort was blocked by Gulacsi with Mane unable to convert the rebound.

Then on the half-hour, the onrushing Salah couldn't finish from close range after meeting a cross by Trent Alexander-Arnold who was sent clear on the right by a slide-rule pass by Mane.

Roused at last by the narrow escapes, Leipzig began to venture beyond Liverpool's high line and managed to carve out some chances of their own.

Kevin Kampl forced a save from Alisson Becker with a curler from distance, while a minute later Swedish playmaker Emil Forsberg, back from injury, clipped a snapshot just wide of the post.

Still, with Brazil's Fabinho back in the starting side and directing affairs in midfield, the better chances fell to Liverpool.

Jota again fired straight at Gulacsi just before the break and then into the side-netting on the whistle after a slip by French defender Dayot Upamecano.

Leipzig, flying domestically on the back of six straight Bundesliga wins but nervy in Budapest, urgently needed a goal to rattle Liverpool but continued to lack penetration in the second half.

In truth, Julian Nagelsmann's men, who dumped Tottenham out at this stage of the competition last year and Manchester United in the group stage this season, rarely looked like claiming an even bigger scalp by turning the tie around.

Their last opportunity arrived on 65 minutes but Alexander Sorloth's header from a cross by Hwang Hee-chan spun over Alisson's fingertips only to rebound off the bar.

Soon after, Salah and Mane ruthlessly took advantage of the let-off by securing Liverpool's berth in the last eight.

In the 70th minute, the Egyptian fired a shot past Gulacsi, then four minutes later Mane turned a cross by substitute Divock Origi past the hapless Hungarian.

"The best thing that the boys did is that no one could see how good Leipzig can be," said Klopp.

"We defended them really well because they are a monster. They usually are so powerful," he said.

"We want to win football games, we feel it now for the first time in a while and it is a massive difference."

RB Leipzig Mohamed Salah Football
Get the latest updates on ICC T20 Worldcup 2022, check out the Schedule and Live Score. Like us on Facebook or follow us on Twitter for more sports updates. You can also download the NDTV Cricket app for Android or iOS.