Lionel Messi and Neymar have been in superb form for Barcelona F.C. in La Liga. The club will hope the magic continues in the Champions League as well. 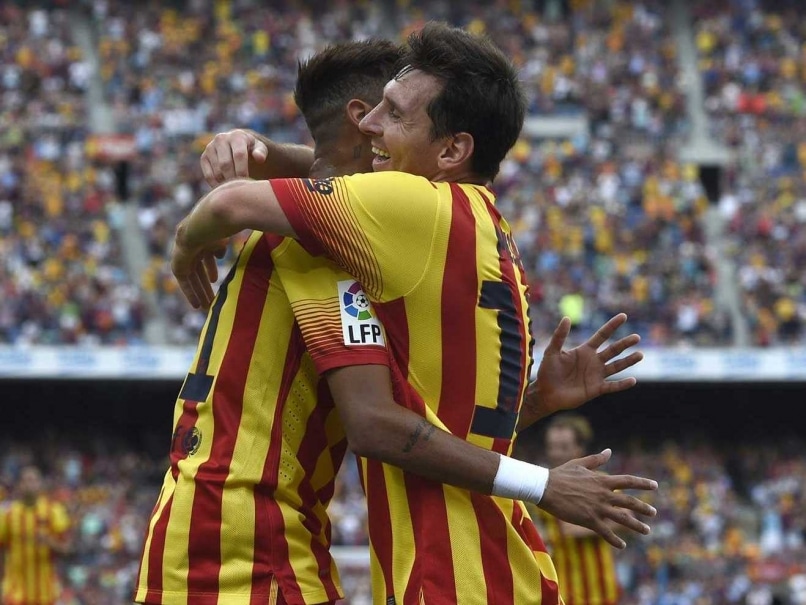 Barcelona F.C. begin their Champions League campaign at home to Cypriot champions APOEL Nicosia on Wednesday in fine form having romped to the top of La Liga with three consecutive wins to give Luis Enrique a dream start to his reign.

The most promising development of all three wins has been the return of four-time World Player of the Year Lionel Messi to something approaching his best form after a disappointing end to a first trophyless campaign in six years last season. (Complete coverage of Champions League)

Messi has scored twice and provided three assists so far this season, including the decisive pass for both Neymar's goals in a 2-0 win over Athletic Bilbao on Saturday. ('With Messi doing miracles in reality, who needs a Playstation?")

Enrique described the Argentine as being capable of things he had never seen even on the PlayStation after his latest recital, whilst Neymar also hailed his teammate as the best in the world.

Those were the first two assists that Messi had provided for Neymar since the Brazilian's move from Santos last year and pointed to a greater understanding between the pair who both suffered injury disrupted campaigns last season.

The Brazilian is likely to be handed his first start of the season for the visit of APOEL with three points a must for Barca given the potent threat of Paris Saint-Germain in temrs of who tops the group.

Pedro Rodriguez is expected to keep his place in the side despite the rapid rise of 18-year-old wonderkid Munir El Haddadi and the Spanish international is determined to make amends for the Catalans quarter-final defeat to Atletico Madrid in last year's competition.

"Every year we fight to get to the end of the competition. Last season it was a shame to go out against Atletico, but we have a lot of desire and ambition to win this title. It is very difficult, especially in the knockout phase," he said on Monday.

"We know it is a great competition and we will need a team that is physically strong and defends well. I am sure it will be a difficult game."

With Enrique's men facing a heavy schedule of six games in 18 days, he is likely to rotate his squad as he often did during his solitary year in charge at Celta Vigo.

That is likely to mean a first start of the season for veteran Xavi Hernandez in midfield, whilst the likes of Gerard Pique, Rafinha Alcantara and Dani Alves should also come back into the starting line-up after being dropped at the weekend.

Comments
Topics mentioned in this article
Barcelona Apoel Nicosia Lionel Messi Neymar Football
Get the latest updates on IPL 2021, check out the IPL 2021 Schedule and Indian Premier League Live Score . Like us on Facebook or follow us on Twitter for more sports updates. You can also download the NDTV Cricket app for Android or iOS.