Jose Mourinho again pointed the finger at his players' failings after a 0-0 draw against Valencia in a Champions League match. 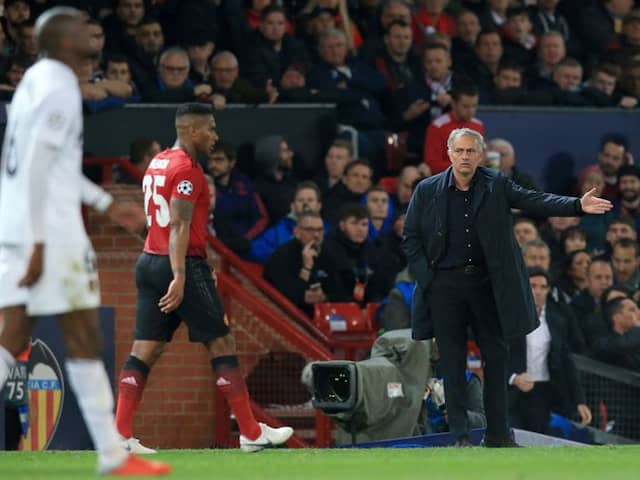 Manchester United manager Jose Mourinho again pointed the finger at his players' failings rather than his own shortcomings after a 0-0 Champions League draw with Valencia that did little to lift spirits at Old Trafford. Mourinho has now failed to win in four consecutive home matches for the first time in his career following defeat to Tottenham, a draw against newly promoted Wolves and a League Cup exit on penalties to second division Derby. Already nine points adrift of Premier League leaders Manchester City and Liverpool, it now appears a question of when and not if Mourinho goes, with an unhappy squad now mirrored by disgruntled fans and outspoken former players.

But unlike the old days under Alex Ferguson, there was no late onslaught on the Valencia goal as the Spaniards, who have won just one game in nine themselves this season, comfortably held out for a point.

"We don't have the technical quality to build from the back," said Mourinho of United's often route one football.

"We knew we wouldn't create 20 chances. Our attacking players aren't in their best moments of confidence and individual level."

As some of Ferguson's most famous pupils watched on, it was another 90 minutes that showed how far United have fallen since the class of '92 made their mark by going for the throat of Barcelona, Bayern Munich and Juventus among others on thrilling European nights at Old Trafford.

David Beckham, Ryan Giggs, Gary Neville and Nicky Butt were in attendance, while Paul Scholes was scathing of Mourinho even before the match started following a dire 3-1 defeat at West Ham on Saturday.

"I think his mouth is probably out of control and I think he's embarrassing the club," said Scholes, who also expressed his surprise that Mourinho is still in charge.

For how much longer will depend on how long the club's executive vice-chairman Ed Woodward is willing to let his bet on the Portuguese run before cutting his losses.

A failure to qualify for the Champions League is what forced Woodward's hand in the past in firing David Moyes and Louis van Gaal. Mourinho's contract with United runs until 2020, meaning sacking the Portuguese would mean a significant payout.

United already sit five points off the top four after seven games and have daunting trips to Chelsea and Manchester City to come in two of their next five Premier League games as well as two Champions League clashes with Juventus.

Mourinho has at least got the three-time European champions back on the Champions League stage by winning the Europa League in his first campaign and finishing second to City in the Premier League last season.

He has cited both achievements in the past few days in defence of his record in just over two years in charge, but increasingly Mourinho is having to lean on his past glories to justify a future.

After a 3-0 defeat to Tottenham in August he called for more respect as a three-time Premier League winner.

However two of those titles came more than a decade ago, with Chelsea in an era when United really were the benchmark.

Now, like their manger, they are a club longing for days gone by.

Valencia Jose Mourinho Football
Get the latest Cricket news, check out the India cricket schedule, Cricket live score . Like us on Facebook or follow us on Twitter for more sports updates. You can also download the NDTV Cricket app for Android or iOS.