Gerard Pique headed home the only goal of the game from Lionel Messi's free-kick midway through the first-half, but APOEL managed to subdue a much-changed Barca side despite the presence of Messi and Neymar up front. 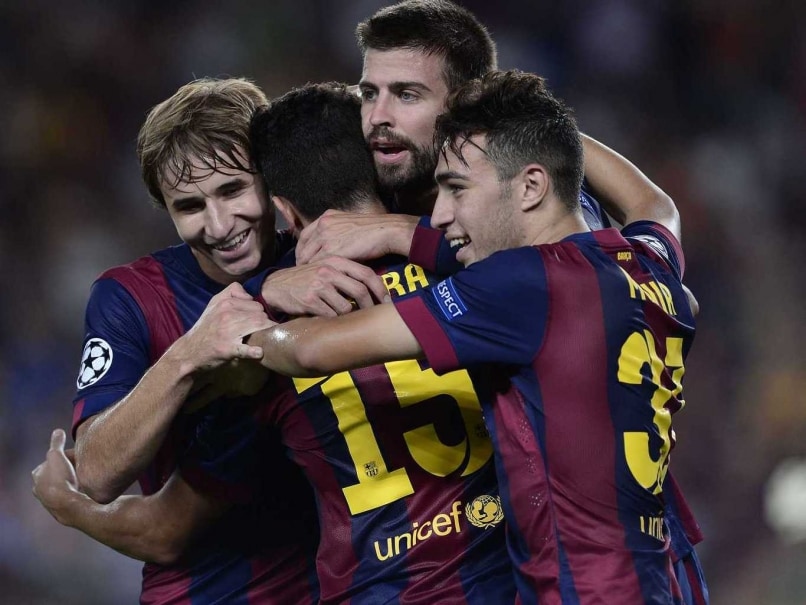 A goal by Gerard Pique gave Barcelona a winning start to their Champions League campaign, but they were far from convincing 1-0 victors at home to Cypriots APOEL Nicosia on Wednesday. (Bayern break Man City hearts with late winner, Chelsea held)

Pique headed home the only goal of the game from Lionel Messi's free-kick midway through the first-half, but APOEL managed to subdue a much-changed Barca side despite the presence of Messi and Neymar up front.

And Luis Enrique's men had debutant Marc-Andre ter Stegen to thank for a fourth consecutive victory to start the season as the German 'keeper made a flying save in stoppage time to deny Gustavo Manduca.

Barca do though go to the top of Group F as Ajax held French champions PSG 1-1 in Amsterdam with Barca set to travel to Paris on matchday two.

"We struggled. We tried to move the ball quickly and we didn't manage to do it," Barca midfielder Xavi Hernandez told Canal Plus.

"It is true we dominated. We tried through the middle and wide, but they defended very well.

"In the end it was a tiring game, but we have won and we have to treat it like it is. It is always good to start the group stage with three points," added Xavi, who equalled compatriot Raul's all-time record of Champions League appearances with 142.

Enrique made nine changes from the side that started Saturday's 2-0 win over Athletic Bilbao with Messi and Munir El Haddadi the only players to retain their place.

Sergi Samper became the latest youngster to make his debut in the early stages of Enrique's reign, whilst Neymar was handed his first start of the season after coming off the bench to score both his side's goals at the weekend.

The number of changes appeared to affect Barca's rhythm in the first-half as they dominated without creating many clear-cut chances from open play.

Messi was first to threaten with a curling free-kick that Urko Pardo in the APOEL goal did well to turn to safety.

Barca then went in front from another Messi free-kick as this time the Argentine's in-swinging delivery was headed home at the near post by Pique.

Messi and Neymar were continuing to link-up well after the former provided the Brazilian with two assists at the weekend and the roles were reversed five minutes before the break as Messi fired Neymar's cutback towards goal and Pardo made another impressive save.

A similar pattern ensued after the break, but the visitors also provided more of a threat and wasted two half chances as Tomas De Vincenti saw a goal-bound effort deflected wide by Marc Bartra before Mario Sergio's cross was cut out by Dani Alves with two unmarked teammates waiting for a better delivery.

Barca should have put the game to bed when Alves picked out Neymar at the back post, but his header was heading off target before Munir turned the ball home and was rightly flagged for offside.

Neymar and Messi were foiled again as the game entered stoppage time, Neymar's deflected shot was well saved by Pardo and Messi's follow up brilliantly blocked by Sergio.

And the hosts could have been made to pay for a lacklustre display when Ter Stegen was forced into the first serious save of his Barca career when he tipped Manduca's well-struck effort behind for a corner.

Comments
Topics mentioned in this article
Barcelona Apoel Nicosia Gerard Pique Football
Get the latest updates on IPL 2021, IPL Points Table , IPL Schedule 2021 , live score . Like us on Facebook or follow us on Twitter for more sports updates. You can also download the NDTV Cricket app for Android or iOS.