Champions League for Napoli, Inter miss out on Europe

Inter Milan's hopes of playing any kind of European football next season were derailed by a 3-1 defeat at home to Lazio, a win which left Inter in eighth place but moved Lazio up to sixth and within site of the Europa League. 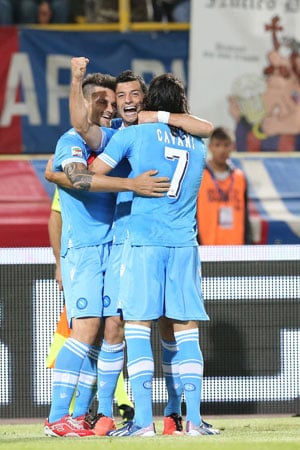 Edinson Cavani stretched his tally to a league-leading 27 goals as Napoli secured Serie A's runner-up spot and Champions League football next season with a 3-0 win over Bologna on Wednesday.

Napoli are 11 points behind Juventus, who secured their 29th league title last weekend, but cannot now be caught by AC Milan who are seven points adrift.

Earlier Wednesday a Mario Balotelli brace and one apiece from Sulley Muntari and Mathieu Flamini put Milan within sight of the Champions League thanks to a 4-0 rout of already-relegated Pescara.

However Massimiliano Allegri's side face a nervous last two games of the season, at home to Roma and away to Siena, before seeing if they will beat Fiorentina to third place after La Viola prevailed 1-0 away to Siena.

Whoever secures third place will have to successfully negotiate a qualifying round to get to the lucrative group stage.

Elsewhere Inter Milan's hopes of playing any kind of European football next season were derailed by a 3-1 defeat at home to Lazio, a win which left Inter in eighth place but moved Lazio up to sixth and within site of the Europa League.

It was Inter's 15th defeat of what has been an injury-plagued campaign and they are now 33 points behind Juventus and seven behind fifth-placed Udinese in the final Europa League spot.

Inter had a terrible start when 'keeper Samir Handanovic turned the ball into his own net following a cross by Antonio Candreva.

The hosts levelled just after the half hour when Ricardo Alvarez beat Federico Marchetti with a header which left the forward nursing a sore face.

Inter missed several chances and paid the price when Lazio were awarded a penalty on the stroke of half-time following Andrea Ranocchia's blatant trip on Sergio Floccari.

Anderson Hernanes stepped up to give Lazio the lead and Inter suffered more misfortune in the second half when Alvarez slipped and missed from the spot after Fredy Guarin had won a penalty.

Lazio virtually killed the game off when 20-year-old Nigerian Ogenyi Onazi, a second-half substitute, scored a screamer from 25 metres.

Parma secured a 1-0 win at Cagliari, a result which kept both sides in mid-table, while Torino and Genoa, both sitting just above the relegation zone, played out a scoreless draw.

Palermo, meanwhile, had been looking for the points that would pull them clear of the drop zone but despite their endeavours in a five-goal thriller with Udinese they were left third from bottom, four points adrift of Genoa.

After a fairly event-less first half Marek Hamsik finally broke the deadlock for Napoli when he collected Blerim Dzemaili's short pass on the left to send a swerving shot inside the post of 'keeper Dejan Stojanovic.

Cavani doubled Napoli's lead just after the hour mark from the spot after the teenage 'keeper had hauled the Uruguayan down as he chased the ball.

Dzemaili gave Napoli a comfortable 3-0 cushion minutes later after he finished off a great run by Cavani, who had been bundled off the ball, by smashing the ball past Stojanovic.

Earlier Balotelli scored one from the spot and one in open play, his 10th and 11 goals in Serie A this season, as Milan swept Pescara aside.

Comments
Topics mentioned in this article
Football Manchester United Chelsea Lazio AC Milan Fiorentina Inter Milan Atalanta Napoli Juventus Catania Chievo Genoa Juventus Stadium Mathieu Flamini
Get the latest updates on ICC T20 Worldcup 2022 and CWG 2022 check out the Schedule, Live Score and Medals Tally. Like us on Facebook or follow us on Twitter for more sports updates. You can also download the NDTV Cricket app for Android or iOS.