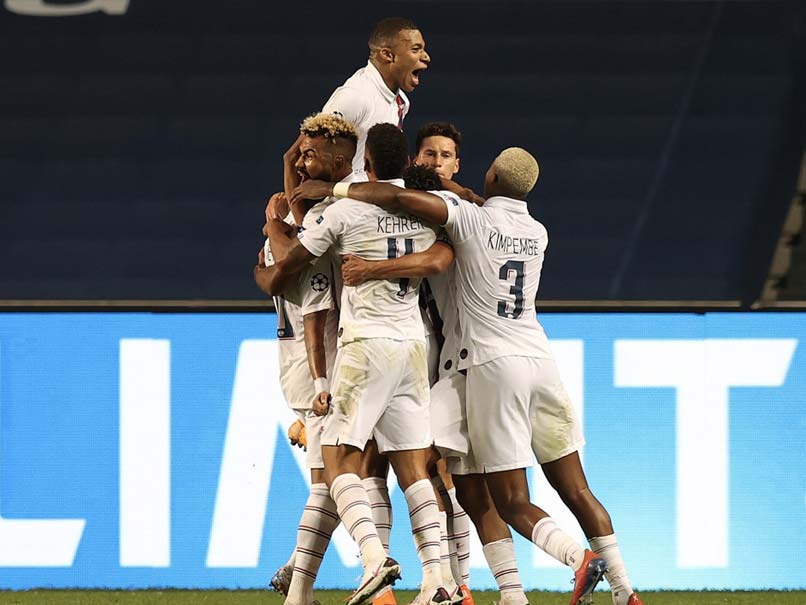 PSG qualified for the semi-finals of the Champions League for the first time since 1995.© AFP

Paris Saint-Germainsnatched a dramatic victory from the jaws of defeat as substitute Eric Choupo-Moting's goal three minutes into added time allowed them to beat Atalanta 2-1 in their Champions League quarter-final in Lisbon on Wednesday. Atalanta were on the brink of extending their remarkable run on into the last four after Mario Pasalic gave the Italians a 27th-minute lead in the first game of the 'Final Eight' at an empty Estadio da Luz. But PSG were rescued as Marquinhos came forward to scramble in a last-minute equaliser and they did not even need extra time to complete the turnaround, with Kylian Mbappe setting up fellow substitute Choupo-Moting to win the tie right at the end.

"When I came on I said to myself, 'we can't lose, we can't go home like that'. The rest is history," said Choupo-Moting, who signed a two-month contract extension to stay at PSG for the 'Final Eight' after his deal expired in June.

The French champions' reward is a place in the semi-finals of Europe's elite club competition for the first time since 1995.

They will play RB Leipzig or Atletico Madrid next Tuesday for a place in the final.

It is the first time PSG have gone beyond the last eight of the Champions League since the Qatari takeover of the club almost a decade ago and all the huge investment that has followed.

"Going home never crossed my mind," said Neymar. "From beginning to end, right from the warm-up, qualifying for the semi-finals was all we thought about. I want to go to the final and nobody will stop me thinking about that."

The result is heartbreaking for Atalanta, who were hoping to continue their fairytale campaign for at least a few more days and give the people of Bergamo more reason to cheer.

The northern Italian city suffered terribly at the height of the coronavirus pandemic earlier this year. Bergamo's death toll from COVID-19 has made it one of the worst-hit regions anywhere during the health crisis.

"We came very close. It looked as it we could do it," said Atalanta coach Gian Piero Gasperini.

This will still go down as a highly successful season for Gasperini's team, who scored eight goals over two legs to beat Valencia in the last 16 in March.

That tie was completed just before football across Europe ground to a halt in the face of the pandemic, but Atalanta have since come back to finish third in Serie A for the second year running, scoring 98 goals in the process.

Beating PSG was ultimately a step too far, but that Atalanta came so close is remarkable enough. After all, their annual wage bill is believed to be equivalent to what PSG pay Neymar alone.

It was because of the pandemic that UEFA decided to bring the Champions League to Lisbon for a straight knockout tournament from the quarter-finals onwards, with all ties one-off matches behind closed doors.

PSG therefore knew they would get no second chance to turn the tie around and coach Thomas Tuchel's gamble on Mbappe's fitness ultimately paid off.

Mbappe was left in a race against time to make this match after spraining his ankle in the French Cup final against Saint-Etienne on July 24.

He was only deemed fit enough to come on for the final 30 minutes, with PSG already diminished without the injured Marco Verratti and the suspended Angel Di Maria.

Neymar was there, but the world's most expensive player failed to take a glorious early chance, shooting wide with only Atalanta goalkeeper Marco Sportiello to beat after bursting through on goal.

Instead it was Atalanta who broke through just before the half-hour mark as Pasalic fired home first-time from 15 yards after the ball fell to him in the box.

Berat Djimsiti might have made it 2-0 on 58 minutes, but then Mbappe came on and PSG stepped up the pressure.

The French side lost goalkeeper Keylor Navas to injury late on and looked to be down and out until Marquinhos bundled in a Neymar assist from close range in the 90th minute, the ball going in off Mattia Caldara's leg.

And Choupo-Moting then grabbed the dramatic winner.

Neymar supplied Mbappe and his low ball across the face of goal was converted by Choupo-Moting, often derided as not good enough for PSG but this time their hero.

Atalanta Football
Get the latest updates on IND vs NZ 2021, check out the Schedule and Live Score . Like us on Facebook or follow us on Twitter for more sports updates. You can also download the NDTV Cricket app for Android or iOS.