Dortmund hosted Bayern at Signal Iduna Park in a 1-1 draw and the German rivals next meet in Wembley's Champions League final on May 25, but pithy comments and open hostility from both sides means there is little love lost. 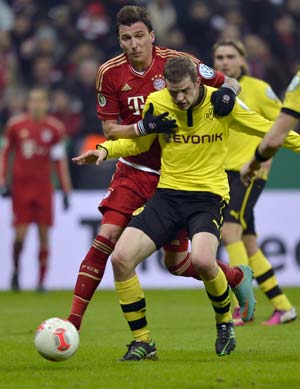 Relations between Bayern Munich and Borussia Dortmund continued to sour ahead of the Champions League final on May 25 as Saturday's dress rehearsal in the Bundesliga was marred by a dismissal and a pitch side argument.

Dortmund hosted Bayern at Signal Iduna Park in a 1-1 draw and the German rivals next meet in Wembley's Champions League final on May 25, but pithy comments and open hostility from both sides means there is little love lost.

Bayern's right-back Rafinha was sent off after 65 minutes in Dortmund for elbowing Borussia midfielder Jakub 'Kuba' Blaszczykowski in the face which sparked an angry exchange between the benches.

Munich's director of sport Matthias Sammer shouted at Dortmund coach Jurgen Klopp to leave Rafinha alone after he remonstrated with the Brazilian who poked Kuba in the face as he walked off the pitch and the pair squared up.

"I wanted to draw a line under the matter - excluding expletives," said Klopp after him and Sammer were ordered to shake hands by referee Peter Gagelmann.

Sammer later played down the incident, but Klopp admitted tensions are running high: "the game had a fair bit of spice in it, despite apparently having been of little importance".

The league point confirmed Dortmund finish second in the Bundesliga, while Bayern were confirmed champions last month having built up a massive 20-point lead.

Both sides rested their stars -- Dortmund fielded six of the side likely to feature at Wembley, Munich only four -- but it was still a tension affair.

"No one came here thinking it would be a friendly," added Klopp.

"It's well known we aren't happy about the way a few things have gone."

Friction has built up in the last fortnight since news broke Dortmund star midfielder Mario Goetze, 20, has actioned a clause in his contract to join Bayern next season.

A host of pithy comments have been exchanged and president Uli Hoeness has openly admitted Bayern were 'annoyed' when Borussia won the league and cup double last year.

Bayern chairman Karl-Heinz Rummenigge told his team to celebrate last week's Champions League win at Barcelona, because they had "an easy away game" at Dortmund "so let rip. We're already German champions,"

Previously, Hoeness stirred things up in February after Dortmund's 1-0 defeat at Munich in the German Cup quarter-final when he said: "The status quo in German football has clearly been restored".

Unusually, delegations from Bayern and Dortmund did not dine together before Saturday's game -- as is customary in the Bundesliga -- and Borussia CEO Han-Joachim Watkze's comments were barely cordial.

"If Bayern want to talk, we can conduct things on a business level anytime.

"We have said 'Good Afternoon', they answered us and that was good enough.

"I have always spoken with a lot of respect and admiration for Bayern. But that has cooled. There are a few irritations now.

"It's all been undermined since Uli Hoeness called for more solidarity in the Bundesliga two weeks ago, in which he mentioned me, but at that time he must have known about the Goetze transfer."

Bayern are bidding to become the first Bundesliga side to win the treble of European, league and cup titles.

They face VfB Stuttgart in the German Cup final at Berlin's Olympic Stadium on June 1, a week after the Champions League final and Dortmund aim to ruin their treble plans.

"Bayern have produced the best season, probably in the world, but rarely do you get everything," said Klopp.

Comments
Topics mentioned in this article
Football Borussia Dortmund
Get the latest updates on ICC T20 Worldcup 2022 and CWG 2022 check out the Schedule, Live Score and Medals Tally. Like us on Facebook or follow us on Twitter for more sports updates. You can also download the NDTV Cricket app for Android or iOS.