Frank Lampard admitted he was happy to take a point and a clean sheet from Chelsea's goalless Champions League opener against Sevilla after so much criticism of his side's defensive capabilities. 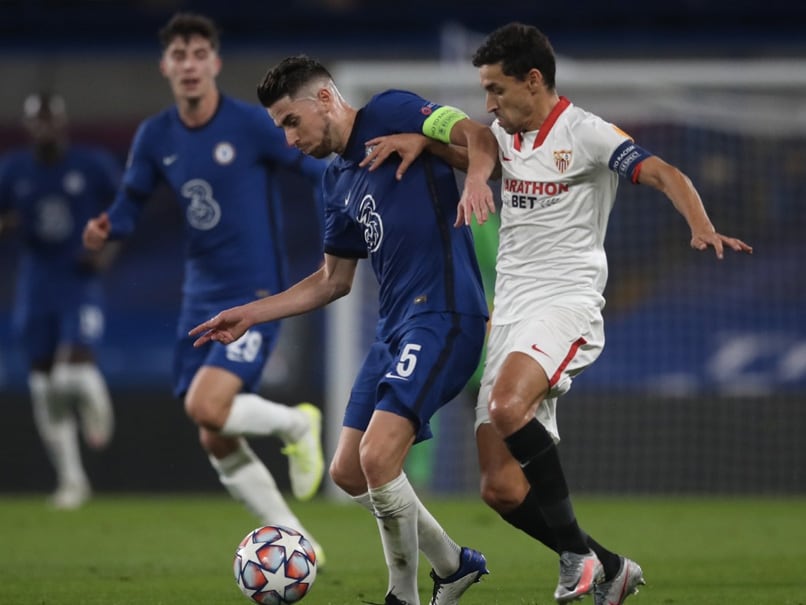 Chelsea played out a goalless draw against Sevilla on Tuesday in their Champions League opener.© AFP

Frank Lampardadmitted he was happy to take a point and a clean sheet from Chelsea's goalless Champions League opener against Sevilla after so much criticism of his side's defensive capabilities. Edouard Mendy returned from injury to replace the error-strewn Kepa Arrizabalaga in goal, but the Senegal international was rarely troubled in an uninspiring match far from the chaos that has characterised the early weeks of the Premier League season.

Chelsea have contributed to that with two 3-3 draws in their opening five games, including at home to Southampton on Saturday when they blew the lead twice.

But Lampard pointed to personnel issues in getting many of his signings from a 220 million pound ($284 million) spending spree on the pitch together for Chelsea's slow start to the season.

The Blues have now won just two of their opening six games of the campaign, but looked far more solid with Thiago Silva back in the side as one of five new signings in the starting line-up.

"He was very good today. He brought quality and experience and affected others around him and that was a big part of us getting a clean sheet," Lampard said of the veteran Brazilian centre-back.

"We are going to get better. We haven't had the personnel in there playing regularly, the more we do that, we'll get better."

With Champions Leaguedebutants Rennes and Krasnodar making up Group E, both sides were happy to settle for a point against what they will perceive as their toughest opponents in the section.

"It was cagey," added Lampard. "Two pretty good teams cancelling each other out in the first game, which is understandable. We take the point and move on."

Sevilla were without highly-rated centre-back Jules Kounde, who attracted interest from Manchester City last month, due to a coronavirus infection.

Timo Werner was the Blues' biggest threat, but the Germany forward wasting his best chance by skewing a shot wide with the last action of the first-half.

Chelsea posed a greater attacking threat after half-time as Christian Pulisic came alive after the US attacker was switched onto the left flank.

Pulisic's run won the corner which produced the home side's best chance of the night, but centre-back Zouma placed his header straight at Bono.

"The last little bit wasn't there today," said Lampard. "We've scored a lot of goals in the Premier Leaguealready this season and we will score goals.

"Today the bonus is the clean sheet. It's a long season and we are in the early stages of it."

Joan Jordan came within inches of winning the game in spectacular style for Sevilla as his sweetly struck volley from the edge of the box dipped onto the roof of the net.

But Lopetegui was happy to settle for a draw against a side that has spent more in one transfer window than Sevilla's entire turnover for last season.

"I'm happy with the job we did and the mentality and personality we showed at a difficult place to come," said Lopetegui. "Against a team who spent 250 million euros this summer and with good players in every position, it required a big collective effort."

Sevilla Frank Lampard Football
Get the latest updates on IPL Auction 2023 and check out  IPL 2023 and Live Cricket Score. Like us on Facebook or follow us on Twitter for more sports updates. You can also download the NDTV Cricket app for Android or iOS.