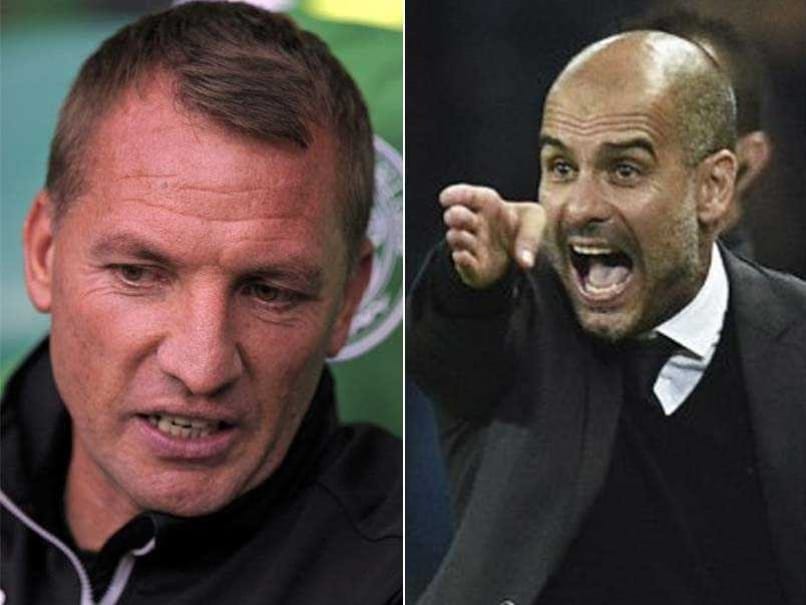 Brendan Rodgers' Celtic will be up against Pep Guardiola's Manchester City in the Champions League.© AFP

Celtic manager Brendan Rodgers says his side's confidence is high ahead of their Champions League clash against Manchester City following their thrashing of Kilmarnock.

The Hoops warmed up for Wednesday's Group C match with a comprehensive 6-1 defeat of Killie in Glasgow's East End to maintain their unbeaten start to the domestic season.

Rodgers' side are top of the Scottish Premiership, five points clear of Hearts with a game in hand, and booked a League Cup semi-final clash with rivals Rangers next month following their defeat of third-tier Alloa Athletic in midweek.

However, the Hoops will face a much tougher test on Wednesday when Pep Guardiola's City visit Celtic Park.

The English Premier League leaders continued their 100 percent start to the season with a 3-1 victory at Swansea City on Saturday but Rodgers insisted his side's win over Killie had been the perfect preparation for the daunting clash.

"It was a brilliant team performance by us. They scored a goal out of nowhere but we stayed calm and created chances and played very well," the Celtic manager said.

"I felt our attacking play was very good but what was as good -- if not even better -- was our defensive aggression.

"If you win a game 6-1 it gives you great confidence, of course.

"They are an incredible team playing with high confidence in their league, but this is a great game for us.

"A home game here at Celtic Park in the Champions League is a really special night and you can't prepare better than what we did today."

Celtic lost 7-0 in their opening Group C fixture away to Barcelona as their defence was torn apart by the Spanish champions' forward line of Lionel Messi, Luis Suarez and Neymar.

The Hoops defenders will now have to find a way to cope with Sergio Augero, who returned from a three-match ban to bag a double in the win over Swansea to take him to 28 goals in his last 27 Premier League games.

"It is a difficult game of course. I have come across Aguero many times. I know his qualities and the level he is at," admitted the former Swansea and Liverpool manager.

"His first goal in English football was against my team Swansea when he came on a substitute and he actually cost more than our stadium at Swansea.

"He is a big talent, one of the leading strikers in the world, but I think as a team they are working at a really high level."

Celtic may be without goalkeeper Dorus de Vries for the match against City after the Dutchman failed to reappear after the break in the win over Killie.

However, Rodgers says he has no worries about pitching in former number one Craig Gordon for the match against the English giants.

"Dorus strained his chest when he landed. He maybe could have played on but we have Craig there fit and capable and I didn't want to take any risk with it," the Celtic manager explained.

"We will see over the next couple of days how he is. Craig is more than capable of coming in to play. He is a brilliant shot-stopper and is improving his game with his feet all the time."

Comments
Topics mentioned in this article
Celtic Manchester City Pep Guardiola Sergio Aguero Football
Get the latest updates on IPL 2020, check out the IPL Schedule for 2020 and Indian Premier League (IPL) Cricket live score . Like us on Facebook or follow us on Twitter for more sports updates. You can also download the NDTV Cricket app for Android or iOS.