City came from 2-0 down to beat the reigning European champions 3-2. Real Madrid beat Copenhagen 2-0, with Ronaldo scoring to set a new record of nine goals in one group-stage campaign. 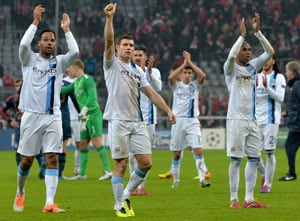 Holders Bayern Munich saw their record run of 10 successive Champions League wins ended in dramatic fashion as Manchester City came from 2-0 down to beat them 3-2 in their final group match on Tuesday.

Both sides had already qualified for the last 16 from Group D and they were joined in the knockout phase by two more sides.

Bayern's Bundesliga rivals Bayer Leverkusen beat Real Sociedad 1-0 to progress from Group A, and Greek outfit Olympiakos advanced from Group C with a 3-1 win against an Anderlecht side reduced by the end to eight men, although the Greeks had made life harder for themselves by missing two penalties.

But the final qualification place behind Real Madrid in Group B will not be decided until Wednesday after a snow storm in Istanbul forced the game between Galatasaray and Juventus to be abandoned after 31 minutes with the score 0-0 -- the Italian side need only a draw to progress as runners-up while the hosts must win.

Madrid beat Copenhagen 2-0 in Denmark, Portuguese star Cristiano Ronaldo scoring to set a new record of nine goals in one group-stage campaign. He later missed a penalty, but the defeat ensured that Copenhagen would finish bottom of the section.

While City produced the performance of the night, their rivals Manchester United ended a two-match home losing streak with a 1-0 win over Ukrainian side Shakhtar Donetsk to guarantee top spot in Group A.

Extraordinary as it may seem, City manager Manuel Pellegrini intimated he was blissfully unaware that a fourth goal for his side -- after goals from the returning David Silva, Aleksandar Kolarov and James Milner had turned the game on its head -- would have seen them top the group ahead of Bayern.

"I was tempted if we scored the fourth goal, of course," replied the Chilean as to why he hadn't sent on leading scorer Sergio Aguero.

"That's why I sent Aguero to warm up...I repeat, for our team it was very important to be first in the group, but not the most important thing. It was difficult to score two goals."

His Bayern counterpart Pep Guardiola, who was experiencing defeat for the first time in a competitive match since he took the reins in the close season, said defeat could be a benefit for the team.

"Perhaps we needed a defeat to remind us of a few things," said Guardiola.

"The most important thing now is that we learn the lessons from the defeat." 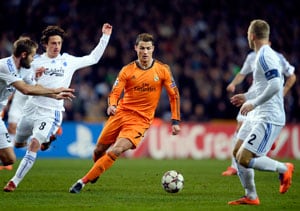 Ronaldo, who broke the record he had held with Dutchman Ruud van Nistelrooy (2004/05), Italian Filippo Inzaghi and Argentinian Hernan Crespo (both of whom scored eight apiece in the 2002/03 campaign), was not completely happy after the match with his performance.

"He is a little angry because he didn't score the penalty (the first he missed all season). But he scored another important goal and played well," said Real coach Carlo Ancelotti.

By finishing top of their group, Ancelotti is at least for the moment spared meeting his former club Paris Saint-Germain, who were already assured of topping Group C prior to going down to a 2-1 defeat at Benfica.

Benfica, though, were denied their place in the last 16 as Olympiakos did what they had to do by beating Anderlecht to reach the knockout stage for the first time since the 2009/10 season -- Benfica must be content with a place in the Europa League, a competition in which they reached the final last term.

United too will avoid Bayern, Real and PSG after finishing top of their group, a Phil Jones goal in the second half following manager David Moyes's tough half-time talk.

"We wanted to top the group and we have," said Moyes.

"I was tough with them at half-time, but we needed to be -- we need to win games.

"A club like Manchester United has to be trying to win the trophy; that's their job.

"You have to get better as the tournament goes on. It's a tough competition, a hard one, but we will take it one game at a time."

Comments
Topics mentioned in this article
Football Bayern Munchen Barcelona James Milner Cristiano Ronaldo Lionel Messi
Get the latest Cricket news, check out the India cricket schedule, Cricket live score . Like us on Facebook or follow us on Twitter for more sports updates. You can also download the NDTV Cricket app for Android or iOS.