Bayern made heavy weather of beating Viktoria Pilsen 1-0 while City reached the knockout stages for the first time, after flopping in the group stage the last two seasons, with a 5-2 thumping of CSKA Moscow in Manchester. 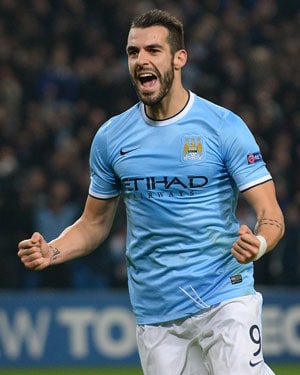 Holders Bayern Munich and English side Manchester City became the first teams to qualify for the knockout stages of the Champions League on Tuesday.

Bayern made heavy weather of beating Viktoria Pilsen 1-0 while City reached the knockout stages for the first time, after flopping in the group stage the last two seasons, with a 5-2 thumping of CSKA Moscow in Manchester.

"That wasn't a festival from us, we made life hard for ourselves," said Bayern's Toni Kroos after his side had at least equalled the Champions League record of nine successive wins.

"In the opening stages, we gave the ball away too often and had too few chances of our own. Nevertheless, we can be proud to have reached the knock-out stage."

Real Madrid came close to joining them but having gone 2-1 up in Turin against Juventus they were pegged back to 2-2 with a goal by former Athletic Bilbao striker Fernando Llorente the Italian club's saviour.

Cristiano Ronaldo's opener for Real, Gareth Bale got their other, took him level for the all time total of goals scored in the group phase with eight.

French champions Paris Saint Germain also missed out on claiming their place on Tuesday as they were held to a surprising 1-1 draw at home to previously pointless and goalless Belgian outfit Anderlecht, who the French side had thumped 5-0 in their match a fortnight ago in Brussels.

In the end with the restive PSG fans booing their side, who nonetheless extended their unbeaten start to the season in all competitions, it was Swedish star Zlatan Ibrahimovic who grabbed them a point for the hosts after they briefly trailed.

City got the better of CSKA with a Sergio Aguero double and a hat-trick from Alvaro Negredo, with manager Manuel Pellegrini saying: "It is the first step, but it's an important one as the team has not qualified before. We have done that now."

While City won with something to spare -- though their defence looked shaky at times and could be exposed against tougher opposition -- their city rivals Manchester United laboured to a 0-0 draw at Real Sociedad, who gained their first point of the campaign.

Robin van Persie summed up United's frustrating evening hammering his second-half penalty against the post, though, Ashley Young looked to have dived to win it in the first place.

To cap it all United's Belgian international midfielder Marouane Fellaini was sent off in the closing stages.

They still lead their group by a point but both Bayer Leverkusen and Shakhtar Donetsk, who drew 0-0 in Ukraine, are lurking.