Chelsea next face two games in succession against Schalke, who will go into the first match top of the group thanks to impressive young German international Julian Draxler's second-half goal that saw off Basel 1-0 in Switzerland. 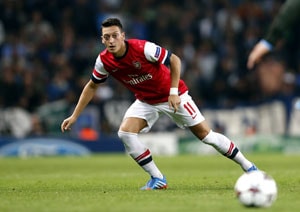 Arsenal did not let down Arsene Wenger on what was his 17th anniversary as manager on Tuesday, easing to a 2-0 win over Napoli and taking a huge step towards the Champions League knockout stages.

First-half goals by record signing Mesut Ozil and in-form Frenchman Olivier Giroud, his sixth this season and coming a day after his 27th birthday, gave the Gunners their 10th successive win.

While they took a firm grip on their group with six points from two games, London rivals Chelsea got their campaign back on track, after an embarrassing opening home defeat to Basel, with a 4-0 rout of Romanian side Steaua Bucharest.

Elsewhere Barcelona have a firm grip on their group with maximum points after a 1-0 win over a gallant Celtic, who played the last half hour with just 10 men as captain Scott Brown was sent off.

Barca have a two-point lead over AC Milan, who face them next in a double header, after the Italian side salvaged a 1-1 draw in Amsterdam with a Mario Balotelli penalty four minutes into stoppage time.

Barca's Spanish rivals Atletico Madrid displayed the grittiness that their coach Diego Simeone displayed during his playing career to come back and beat Porto 2-1 away and top their group on six points, leaving them unbeaten on the field of play this season.

Arsenal hold a three-point lead over both Napoli and last season's beaten finalists Borussia Dortmund, who beat Marseille 3-0 and will provide a stern test for Wenger's men in the upcoming double header.

Wenger, though, was in raptures over his side's performance against Napoli.

"The first half was amazing, absolutely fantastic. Everything was in there. All that you dream to see when you come to watch football," Wenger said.

His Dortmund counterpart Jurgen Klopp had to watch his side win from the stands because of a UEFA ban, but he was delighted with what he saw as two goals from Polish striker Robert Lewandowski and another from Marco Reus saw them to an easy win.

"It was a great game, Marseille are a strong team and you have to give it everything you have against them.

"My team were prepared to stick their foot in the door and make sure of the win."

Chelsea recovered from an early blow of Fernando Torres limping off with Brazilian Ramires playing the major role by grabbing a double, although German international Andre Schurrle was the player to take the eye.

"This result today is important, because if you don't win, you are a bit under pressure."

Chelsea next face two games in succession against Schalke, who will go into the first match top of the group thanks to impressive young German international Julian Draxler's second-half goal that saw off Basel 1-0 in 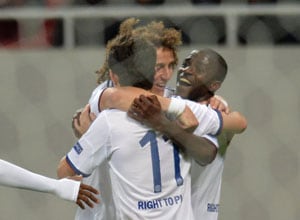 The game had been stopped in the first-half due to a group of environmental protestors abseiling from one of the stands.

Despite Barcelona -- who were missing the injured Lionel Messi -- struggling to overcome Celtic, their coach Gerardo Martino was more than satisfied with the performance which was decided by Cesc Fabregas's excellent header 15 minutes from time.

"We deserved the victory because we had the majority of the possession and created chances when we needed to, it was a good all round performance," said Martino.

"We managed the game very well and won in a place where very few teams do," said Atletico coach Simeone.

"In particular I want to congratulate the team for the way they reacted in the second-half after a difficult first-half."

Comments
Topics mentioned in this article
Arsenal Chelsea Football Manchester United
Get the latest updates on ICC T20 Worldcup 2022 and CWG 2022 check out the Schedule, Live Score and Medals Tally. Like us on Facebook or follow us on Twitter for more sports updates. You can also download the NDTV Cricket app for Android or iOS.