Arsenal were on course to qualify for the knockout stage of Europe's elite club competition for the 15th successive season, but the Gunners' creaky defence was brutally exposed by Anderlecht in a remarkable finale that saw the Belgians score three times in the last 29 minutes. 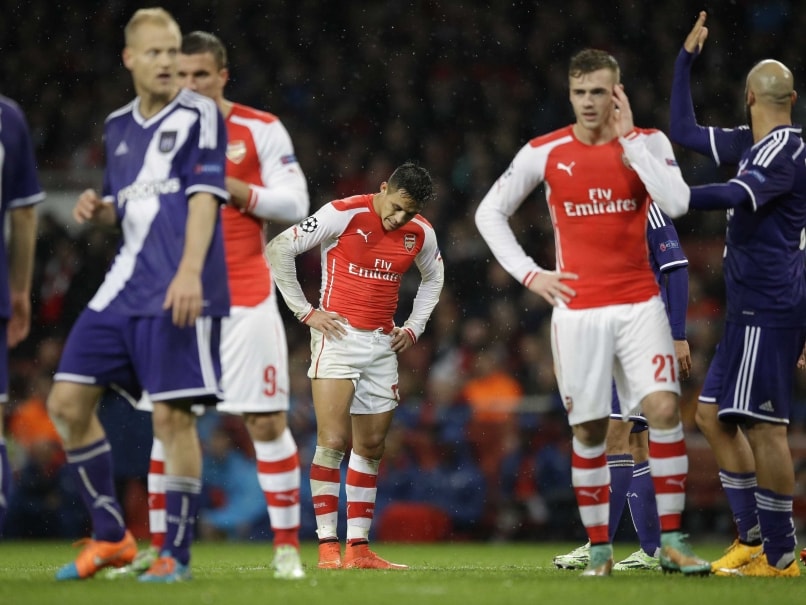 Arsenal are likely to have to settle for second place and a tougher draw in the last 16.© AP
London:

Arsenal squandered a golden opportunity to book their place in the Champions League last 16 as Anderlecht stormed back from three goals down to rescue a stunning 3-3 draw on Tuesday.

Arsene Wenger's side was on course to qualify for the knockout stage of Europe's elite club competition for the 15th successive season after Mikel Arteta's penalty and fine strikes from Alexis Sanchez and Alex Oxlade-Chamberlain put them in complete control by the 58th minute. (Read: Real Madrid, Dortmund Make Last 16)

But the Gunners' creaky defence was brutally exposed by Anderlecht in a remarkable finale that saw the Belgians score three times in the last 29 minutes to stun the Emirates Stadium into silence.

Anthony Vanden Borre sparked the incredible revival with a tap-in from an offside position and he then netted a penalty before Aleksandar Mitrovic's stoppage-time header completed the heroic comeback.

"We had some bad luck, the first goal (for Anderlecht) was offside but we had a lack of concentration and thought the game was won," Wenger said.

"Overall we were poor defensively from the first to the last minute.

"Am I angry or disappointed? Both."

Anderlecht boss Besnik Hasi added: "We come from a small league but we have shown for the second time against Arsenal that we can compete against these big teams."

The north Londoners -- now five points behind Group D leaders Borussia Dortmund -- are likely to have to settle for second place and a tougher draw in the last 16, assuming they can guarantee qualification in their final two matches against Dortmund and Galatasaray.

Hasi's side must have feared it wouldn't be their night when they arrived at the stadium less than an hour before kick-off after the team bus was stuck in heavy traffic.

But they showed no signs of being affected in the opening moments and Dennis Praet fired in a low strike that deflected off Per Mertesacker and flashed just past a post with Gunners goalkeeper Wojciech Szczesny wrong-footed.

Anderlecht had outplayed Arsenal for long periods despite losing in Belgium two weeks ago and they threatened again, with Sacha Kljestan skipping through the hosts' defence to force Szczesny into a good save.

But the Belgians' gung-ho approach also exposed their leaky defence to more pressure than was wise.

And Wenger's side exploited the holes in the Anderlecht rearguard to take the lead in the 25th minute.

Sanchez, in imperious form, slipped a perfectly-weighted pass through to Danny Welbeck and the Arsenal striker's run was impeded by Chancel Mbemba, who fell backwards into his opponent and knocked him to the turf.

There was little malice in Mbemba's challenge but French referee Clement Turpin felt it was worthy of a penalty and Arsenal captain Arteta stepped up to calmly chip the spot-kick into the roof of the net.

With the momentum now firmly in their favour, Arsenal swept forward again and doubled their advantage four minutes later.

When Sanchez's free-kick cannoned into the Anderlecht wall, it seemed the chance had been squandered, but the Chile winger's response to his initial miscue was thrilling as he seized on the looping rebound to smash a blistering volley through the now splintered wall and past goalkeeper Silvio Proto.

It was a fitting way to mark Arsenal's 500th goal since moving to the Emirates and Oxlade-Chamberlain capped his vibrant display with the 501st in the 58th minute.

The England winger took possession from Sanchez's tenacious tackle and accelerated into the penalty area to plant a fine finish into the far corner.

Yet Vanden Borre reduced the deficit three minutes later when his tap in from Andy Kawaya's cross was allowed to stand even though the defender was clearly offside.

Arsenal's always-vulnerable defence was all at sea and Vanden Borre struck again with a 73rd-minute penalty after Nacho Monreal hauled down Mitrovic.

Anderlecht could scent blood now and they poured forward in a frantic climax, which reached a crescendo when Andy Najar whipped over a 90th-minute cross and Mitrovic got in front of Mertesacker to bury a diving header beyond Szczesny.

Comments
Topics mentioned in this article
Arsenal Anderlecht Football
Get the latest updates on IPL 2020, check out the IPL Schedule for 2020 and Indian Premier League (IPL) Cricket live score . Like us on Facebook or follow us on Twitter for more sports updates. You can also download the NDTV Cricket app for Android or iOS.