Barca will be without the injured Messi when they face Celtic in the Champions League on Tuesday. 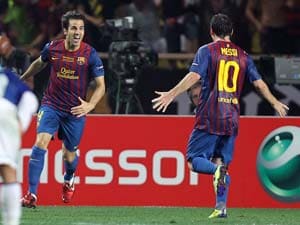 Cesc Fabregas has challenged his Barcelona team-mates to prove they can thrive without Lionel Messi when they face Celtic in the Champions League on Tuesday.

Argentina forward Messi injured his thigh in the 2-0 win over Almeria on Saturday and will miss the Group H clash against the Scottish champions as a result.

Former Arsenal midfielder Fabregas acknowledged losing the player widely recognised as the best in the world was a significant blow, but he is adamant a club of Barca's stature should be able to cope with his absence.

"It is a test because we always want him in our team," Fabregas said on Monday. "Obviously Lionel is the best player in the world, I don't even have to say that, and you obviously will miss a player of his talent and dedication.

"He can win a game at any moment so we are sad for that but you cannot feel sorry for yourselves because you are missing a great player.

"Without Messi we will have to take more responsibility. I think we all have to step up and make sure that we don't feel his absence, and show we can play great football without him.

"When he is not there we have to adapt the situation and players like Neymar, myself if I play, Alexis Sanchez, Cristian Tello, Pedro Rodriguez; we have to step up and do the job that a striker is made for which is scoring goals and giving assists."

Barcelona coach Gerardo Martino also insisted the absence of Messi will not be used as an excuse should his side lose in Glasgow.

"Messi is the best player in the world but we have a great team and his absence cannot be an excuse if we don't get a good result tomorrow night," Martino said.

And Fabregas believes 21-year-old Brazilian striker Neymar could be the one Barcelona player capable of one day reaching the levels of Messi.

"He is a very talented player, very quick and has the skills to get away from you easily," the Spain international said.

"He is already a star but this boy will have a lot to say in the future of football.

"It is up to him. Everything is in his hands.

"He came here to learn, to compete, to fight, to grow up as a player and a person.

"He is still a boy and in the future we will be talking about him as one of the greatest."

Comments
Topics mentioned in this article
Football Uruguay Bayern Munchen Barcelona Brazil Villarreal Real Madrid Alexis Sanchez David Villa Cesc Fabregas Lionel Messi Pedro
Get the latest updates on ICC T20 Worldcup 2022 and CWG 2022 check out the Schedule, Live Score and Medals Tally. Like us on Facebook or follow us on Twitter for more sports updates. You can also download the NDTV Cricket app for Android or iOS.