Real Madrid continued their 12-year dominance of neighbours Atletico Madrid with a narrow 2-1 win at the Vicente Calderon on Saturday to close to within five points of Spanish league leaders Barcelona. 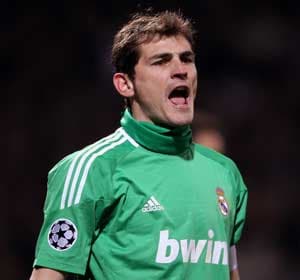 Real Madrid continued their 12-year dominance of neighbours Atletico Madrid with a narrow 2-1 win at the Vicente Calderon on Saturday to close to within five points of Spanish league leaders Barcelona.

It was Real's fourth defeat of Atletico this season, after two wins in the King's Cup and another in the league.

Argentine Sergio Aguero pulled a goal back late on for Atletico, but a stellar display from Real goalkeeper Iker Casillas ensured another defeat for their city rivals, who have not beaten Real since 1999.

The latest derby win capped a fine week for Real, who defeated Lyon 3-0 on Wednesday to reach the quarter-finals of the Champions League.

Earlier, Bojan Krkic marked his 100th Barcelona league appearance with a goal in a nervy 2-1 home win over Getafe.

The 20-year-old made it two goals in as many games with a 49th-minute strike to celebrate his landmark, as he became the third youngest player in league history to reach a century of league appearances.

Brazilian Dani Alves had opened the scoring on 16 minutes with a thunderous volley from distance before Bojan netted.

It extended Barcelona's run of home wins to 12 consecutive games, although they had to survive an agonising last few minutes after Manu del Moral pulled a goal back in the 87th minute.

"We wanted to go into the international break with at least the five-point gap (over Real)," said Alves.

"We have to kill off games. They almost scored at the end and we felt the pressure in the final minutes."

Real were under pressure to respond and shrugged off some heavy legs to inflict yet another defeat on derby rivals Atletico.

Benzema got Real off to a flying start on 11 minutes, running on to a pass from Sami Khedira before flicking the ball in with the outside of his boot.

It was Benzema's 10th league goal of the campaign, with seven of them coming in the last four matches.

Atletico had looked out of sorts but going behind brought the best out of them and the hosts forced a string of saves from Casillas.

The Real goalkeeper denied Diego Godin and then produced two fine saves to deny Aguero on 21 and 23 minutes.

Real rode their luck and extended their lead on 32 minutes through Ozil, although goalkeeper David de Gea will feel he should have done better.

German World Cup star Ozil chipped a shot towards goal and the highly-rated de Gea got a hand to it but could not push it over as it looped into the net.

Ozil appears to enjoy playing against Atletico, having scored in three of the four wins over them this season.

An action-packed first half came to an end with Real somehow 2-0 up and Atletico continued where they left off after the interval.

The overworked Casillas was called into action again on 54 minutes to foil the frustrated Aguero for the third time.

Aguero broke the offside trap and bore down on Casillas but Spain's World Cup-winning captain blocked his low shot with an outstretched hand.

Cristiano Ronaldo was substituted on 72 minutes to the sound of insults from the Atletico fans and the Portuguese attacker responded by cupping his ears to the home supporters.

Aguero pulled a goal back in the 86th minute as he curled a shot into the corner to finally beat Casillas and set up a tense final few minutes.

Comments
Topics mentioned in this article
Football Real Madrid Iker Casillas Atletico Madrid
Get the latest updates on ICC T20 Worldcup 2022 and CWG 2022 check out the Schedule, Live Score and Medals Tally. Like us on Facebook or follow us on Twitter for more sports updates. You can also download the NDTV Cricket app for Android or iOS.