Juventus struggled at times before Tevez broke the deadlock in the 59th, following good interplay with Kwadwo Asamoah. 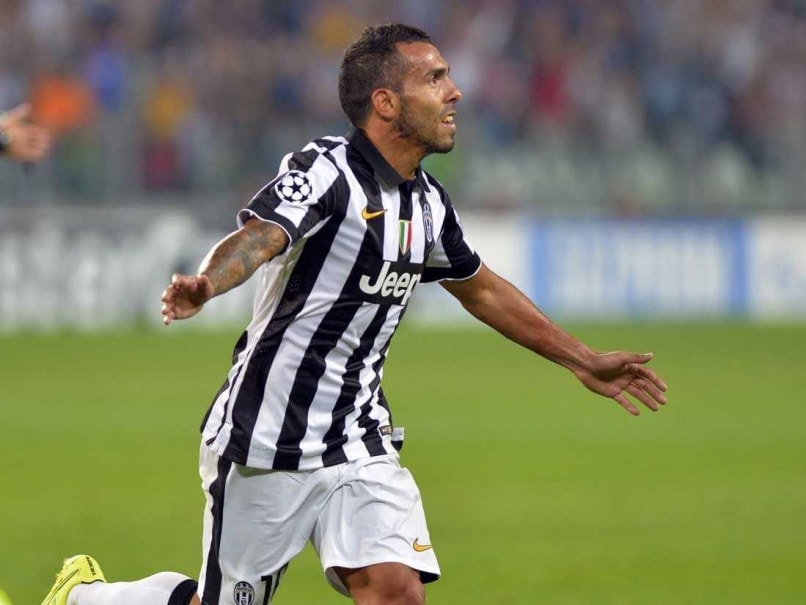 Juventus' Carlos Tevez celebrates after scoring his second goal during a Champions League, Group A soccer match between Juventus and Malmoe.© AP
Turin:

Carlos Tevez broke his Champions League duck as he scored twice to lead Juventus to a hard-fought 2-0 victory at home to Malmo in their opening Group A fixture on Tuesday. (Other news: Real Madrid, Liverpool Register Wins | Borussia Dortmund beat Arsenal)

Juventus struggled at times before Tevez broke the deadlock in the 59th, following good interplay with Kwadwo Asamoah.

It was the Argentina forward's first goal in Europe's elite club competition in more than five years.

Tevez then sealed the result in stoppage time with a well-placed free kick that sailed into the top corner.

"I didn't miss scoring in the Champions League, that wasn't a problem for me," Tevez said. "I play for a team and with this team I always play as if it was my last match.

"I'm playing deeper now. And today when I rushed in to finish things off I managed to score twice. We need to continue like this. We know we need to win every match. The newspapers say it's an easy group but, especially after last year's experience, we know it's not like that at all."

The Bianconeri dominated possession against the Swedish side, but failed to create many clear cut opportunities, and it was Malmo which almost took the lead in the first half.

"Nothing is easy," new Juventus coach Massimiliano Allegri said. "We knew we were facing a team which defended well and was also very physical. We needed to be good technically. In the first half we were disorganized, while in the second we dealt with the ball better.

"It was important to get off to a good start. It will be a difficult group because Olympiakos beat Atletico tonight, and we will need a lot of points to progress."

Juventus was without key playmaker Andrea Pirlo, who was injured along with Arturo Vidal and Andrea Barzagli, while Roberto Pereyra was suspended.

The Italian side was eager to get off to a good start following last season's disappointing group stage exit, while it was Malmo's first appearance in the Champions League proper.

Juventus struggled during the first half and it was Malmo which had the best chance in the 19th minute when Italy goalkeeper Gianluigi Buffon did well to parry Magnus Eriksson's shot at point-blank range.

Tevez had not scored in the Champions League since netting for Manchester United more than five years ago and the Argentinian had several opportunities to break his duck.

After hitting an effort straight at the goalkeeper earlier in the first half, Tevez had another good chance on the half-hour mark, following Stephan Lichtsteiner's pull back from the byline, but he fired into the sidenetting under pressure.

Juventus should have scored as the first half drew to a close when Lichtsteiner burst into the box onto a Tevez through ball, but he overhit his pass as he attempted to pick out Asamoah at the back post.

The home side was awarded a dangerous free kick on the stroke of halftime but Leonardo Bonucci hit it into the wall and then fired the rebound straight into the goalkeeper's arms.

Juventus finally found a way through in the 59th when Tevez played a one-two with Asamoah, who then backheeled it back into his path, for the Argentine to rifle into the bottom left corner.

Fernando Llorente thought he had doubled Juve's lead immediately afterward, but his effort was ruled out for a tight offside decision against Lichtsteiner.

Lichtsteiner was dangerous all night and the Switzerland defender almost got on the scoresheet in the 70th but his header from Patrice Evra's cross crashed down before bouncing over the bar.

Llorente also had a good opportunity to wrap up the points but Malmo goalkeeper Robin Olsen pulled off a good double save to deny the Spaniard twice.

Tevez sealed the result after substitute Alvaro Morata won a free kick for Juventus on the edge of the area shortly before the final whistle.

Comments
Topics mentioned in this article
Juventus Malmo Carlos Tevez Football
Get the latest updates on IND vs NZ 2021, check out the Schedule and Live Score . Like us on Facebook or follow us on Twitter for more sports updates. You can also download the NDTV Cricket app for Android or iOS.