Carlos Bacca and Luiz Adriano netted a goal each to help AC Milan register their opening win of the season in a 2-1 victory over Empoli. 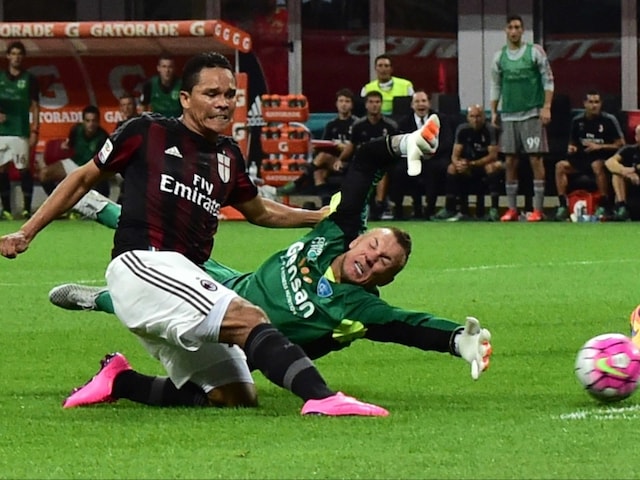 AC Milan recruits Carlos Bacca and Luiz Adriano hit their maiden Serie A goals as the Rossoneri registered their opening win of the season in a 2-1 victory over Empoli on Saturday. (Click here for latest Football stories)

Milan, who like city rivals Inter failed to qualify for Europe this season, started the new campaign with a 2-0 defeat to Fiorentina last week.

The fallen Serie A giants caused a minor shock in midweek after signing former striker Mario Balotelli from Liverpool on loan for the season as they look to qualify for Europe next year.

Balotelli started on the bench and, with Bacca and Adriano in fine fettle, was kept there by Milan coach Sinisa Mihajlovic as his side scraped a first league win of the season two weeks ahead of their next outing, away to Inter.

Colombian striker Bacca, signed from Sevilla in the summer, gave the hosts a 16th minute lead after a combination of pace and power took him past Marco Zambelli to beat on-rushing goalkeeper Lucasz Skorupski with a fine angled strike.

Empoli, however, were anything but a pushover.

The visitors had scored against Milan in their last five outings and were quickly back on level terms when former Milan forward Riccardo Saponara finished off a quick one-two with Massimo Maccarone to beat Diego Lopez in the 20th minute.

Milan walked off at half-time to a chorus of whistles and jeers as fans considered having to settle for a share of the spoils against the Serie A minnows.

The immediate chances fell to Empoli after the restart with midfielder Daniele Croce and striker Manuel Puccierelli, the latter on 63 minutes, both testing Lopez in the Milan net.

The visitors, however, paid the price for giving away an avoidable corner shortly afterwards with Adriano rising well to fire a powerful header into the net after Skorupski had misjudged his run-out.

Earlier, Antonio Floro Flores came off the bench and hit a late winner as Sassuolo went provisionally top with a 1-0 win at Bologna.

Floro Flores hit his first goal of the new campaign last week in a precious 2-1 home win over Napoli, but this time the Italian striker required fortune to go his way.

After replacing Matteo Politano on the hour mark, Floro Flores made an immediate impact for the visitors as they fought for a late goal in what was a balanced encounter at the Renato dall'Ara stadium.

Minutes from the final whistle, Bologna's defence was caught unawares by a Sassuolo counter-attack and an alert Floro Flores pounced on a deflected pass from fellow forward Karim Laribi to beat Antonio Mirante with a well-taken angled drive.

Promoted Bologna, looking for their first Serie A win since March 2014, pressed hard in the final minutes with keeper Mirante running up the park and coming close to making contact with his head at a corner.

But Sassuolo held on for a second consecutive win that sent the 'Neroverdi' top of the pile ahead of the rest of the weekend's fixtures.

Comments
Topics mentioned in this article
Carlos Bacca Luiz Adriano AC Milan Football
Get the latest Cricket news, check out the India cricket schedule, Cricket live score . Like us on Facebook or follow us on Twitter for more sports updates. You can also download the NDTV Cricket app for Android or iOS.