Bayern Munich romped to a 3-1 win at Werder Bremen on Saturday as Robert Lewandowski claimed another goal-scoring milestone in the Bundesliga. 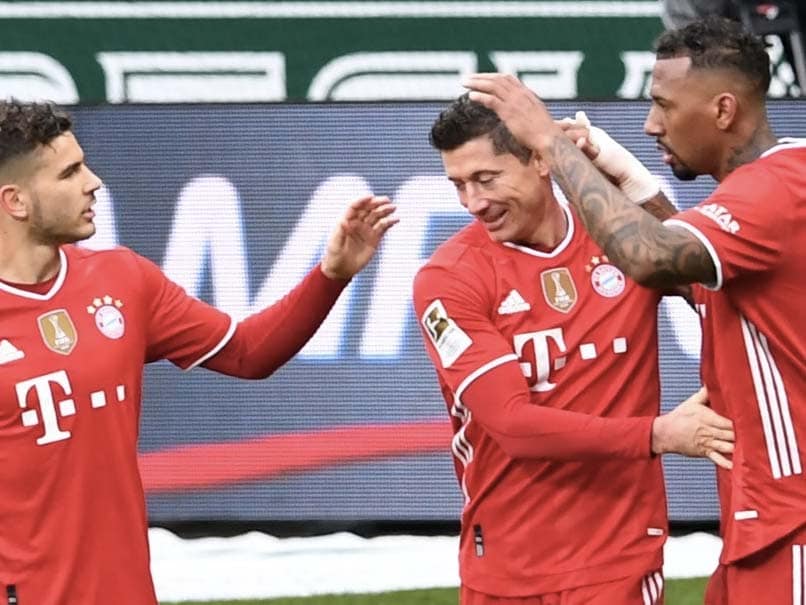 Bayern Munichromped to a 3-1 win at Werder Bremen on Saturday as Robert Lewandowski claimed another goal-scoring milestone in the Bundesliga and hit the woodwork three times in a dynamic display. Bayern dominated their final fixture before hosting Lazio in the Champions League last 16, second leg, on Wednesday holding a 4-1 lead. Goals by Leon Goretzka and Serge Gnabry put Bayern 2-0 up in Bremen before Lewandowski claimed his 32nd league goal this season. Bremen striker Niclas Fuellkrug came off the bench to score a late consolation goal. "We were fresher and more active. We had control of the game. We should have scored more," said Bayern forward Thomas Mueller, who set up the first two goals.

Despite hitting the post and clipping the crossbar, Lewandowski finally scored with an hour gone to equal former Schalke striker Klaus Fischer's tally of 268 Bundesliga goals.

Only Bayern legend Gerd Mueller has scored more in Germany's top-flight with 365 in 427 league games.

A superb save from Bremen goalkeeper Jiri Pavlenka also prevented Lewandowski scoring with a powerful header late on.

The victory extends Bayern's lead at the top of the table to five points.

Second-placed RB Leipzig need to beat Eintracht Frankfurt at home on Sunday to keep pace with the Bavarians.

Mueller was outstanding in Bremen as his deft flick allowed Goretzka to head home the opening goal from a corner on 22.

With a superb piece of skill, Mueller then deftly chested down the ball and rolled a pass into Gnabry's path to score on 35 minutes.

It was 2-0 at the break and Lewandowski hit the post twice in quick succession early in the second-half.

The Pole finally got on the scoresheet when he tapped home from close range before Bremen scored their consolation after a counter-attack.

Third-placed Wolfsburg put another nail in the coffin of bottom side Schalke who crashed to a 5-0 defeat away from home.

Schalke's former Arsenal defender Shkodran Mustafi headed into his own net in the first half.

The floodgates opened after the break when  Wout Weghorst, Ridle Baku, Josip Brekalo and Maximilian Philip all scored for Wolfsburg.

With nine games left, Schalke have only a mathematical chance of avoiding a first relegation in 30 years.

With just one league win all season, they are 11 points from escaping the bottom three with a horrendous goal difference of -50.

Mainz claimed a huge win in the relegation battle when Swedish striker Robin Quaison scored six minutes from time in their 1-0 win over Freiburg.

Moments after a stunning save by Freiburg goalkeeper Florian Mueller, on loan from Mainz, Quaison tapped in the winning goal from close range.

Union moved a point from the European places after their captain Christopher Trimmel scored their winner in a 2-1 home victory against Cologne.