Mame Biram Diouf opened the scoring with a powerful header from Edgar Prib's cross in the 24th minute, and Szabolcs Huszti secured the result with an impressive free kick in the 68th. 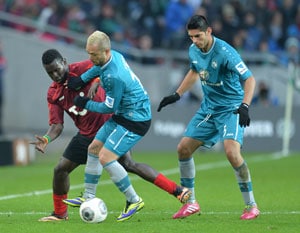 Mame Biram Diouf opened the scoring with a powerful header from Edgar Prib's cross in the 24th minute, and Szabolcs Huszti secured the result with an impressive free kick in the 68th.

"It brings a certain trust to approach the Bundesliga with more confidence," said Hannover coach Mirko Slomka, who had been coming under pressure going the game.

Frankfurt midfielder Martin Lanig was sent off in the 57th when he received his second yellow card for an ill-judged tackle on Artur Sobiech, who earlier had a goal disallowed.

After initially awarding the score in the 28th, referee Guenter Perl ruled it out after consulting with his linesman as the Polish striker was in an offside position for Ron-Robert Zieler's long kick out.

Frankfurt coach Armin Veh was later ordered to the stands for protesting a penalty decision that didn't go his way.

"Someone has to be shot in the penalty area for us to get a penalty," Veh said.

Veh's mood worsened when Vaclav Kadlec then bundled Prib over at the other end, leading to the free kick that Huszti brilliantly converted.

"It's clear that we couldn't put the opponent under pressure. But we also didn't allow much," said Veh, whose side is now winless in nine games.

Hannover captain Steve Cherundolo came on in injury time to make his long-awaited comeback from injury to a rousing reception from fans.

The 34-year-old American defender played five games in April and May after left knee surgery in February, but underwent another knee operation in August.

Frankfurt was in danger of slipping into the relegation zone with Freiburg playing later at Borussia Moenchengladbach.

Comments
Topics mentioned in this article
Football Mame Diouf
Get the latest updates on IPL Auction 2023 and check out  IPL 2023 and Live Cricket Score. Like us on Facebook or follow us on Twitter for more sports updates. You can also download the NDTV Cricket app for Android or iOS.