Pep Guardiola's Bayern remain second in the table, but are now level with Dortmund on both goal difference and points after their win in Gelsenkirchen. 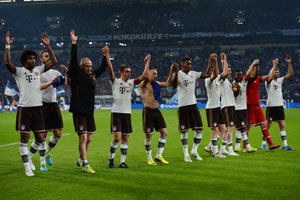 Bundesliga leaders Borussia Dortmund dropped their first points of the season on Saturday with a 1-1 draw at Nuremberg, while Bayern Munich earned a 4-0 win at Schalke.

Pep Guardiola's Bayern remain second in the table, but are now level with Dortmund on both goal difference and points after their win in Gelsenkirchen.

"That was our best performance so far in the Bundesliga, we dominated against one of the best teams in Germany," said Guardiola after his side enjoyed 70 percent ball possession against Schalke.

"We did very well over the 90 minutes which pleased me.

"In Germany, you have to limit your opponents' ability to counter-attack and we cut down their chances and controlled the game."

Despite making a bright start, Jens Keller's Schalke undid all their good work as first Munich vice-captain Bastian Schweinsteiger, then striker Mario Mandzukic were left unmarked in the area to head home.

Bayern have now gone 31 games without losing a Bundesliga match and have recorded 26 league wins and five draws since losing 2-1 loss to Leverkusen in October 2012.

Star striker Robert Lewandowski and midfielder Henrikh Mkhitaryan started on the bench and were rested after Borussia's 2-1 Champions League defeat at Napoli on Wednesday.

"We wanted to play a little better, but we can live with the point," said Klopp before revealing both attacking midfielder Marco Reus and Schmelzer picked up injuries.

"Marcel has a hardening of his left thigh, we have to wait on him, while Marco has a heavily bruised thigh, which is extremely painful. It'll be close as to whether they play on Tuesday," Klopp added ahead of Dortmund's German Cup second-round clash at second division 1860 Munich.

Bayer Leverkusen are third after their 4-1 win at Mainz 05 as Australia star Robbie Kruse scored two first-half goals, his first Bundesliga goals for Leverkusen since joining from Fortuna Duesseldorf.

The 24-year-old drilled home a pass from Germany winger Sidney Sam after 19 minutes, set up Sven Bender for Leverkusen's second, then converted a pass from captain Simon Rolfes for Bayer's third just before half-time.

The league's joint top-scorer Stefan Kiessling then scored his fifth goal of the season when he headed home unmarked early in the second half, before Mainz midfielder Yunus Malli netted a late consolation.

Hanover 96 stay fourth after a 2-1 win at home to Ausgburg with Hungary midfielder Szabolcs Huszti netting an 89th-minute penalty.

After sacking coach Thorsten Fink last week in the wake of their 6-2 drubbing at Dortmund, Hamburg slumped to their fourth defeat of the season at home to neighbours Werder Bremen.

Ex-Bayern Munich striker Nils Petersen scored both of Bremen's goals either side of half-time to compound their north German neighbours' misery in a 2-0 defeat.

Wolfsburg moved up to sixth with a 2-1 win at home to Hoffenheim as Croatia's ex-Bayern striker Ivica Olic scored both Wolves goals.

Hoffenheim took the lead when French striker Anthony Modeste pounced on a mistake in the Wolves defence and fired home with a quarter of an hour gone.

Wolfsburg came back with two goals in four minutes either side of half-time as Olic fired home from close range for both.